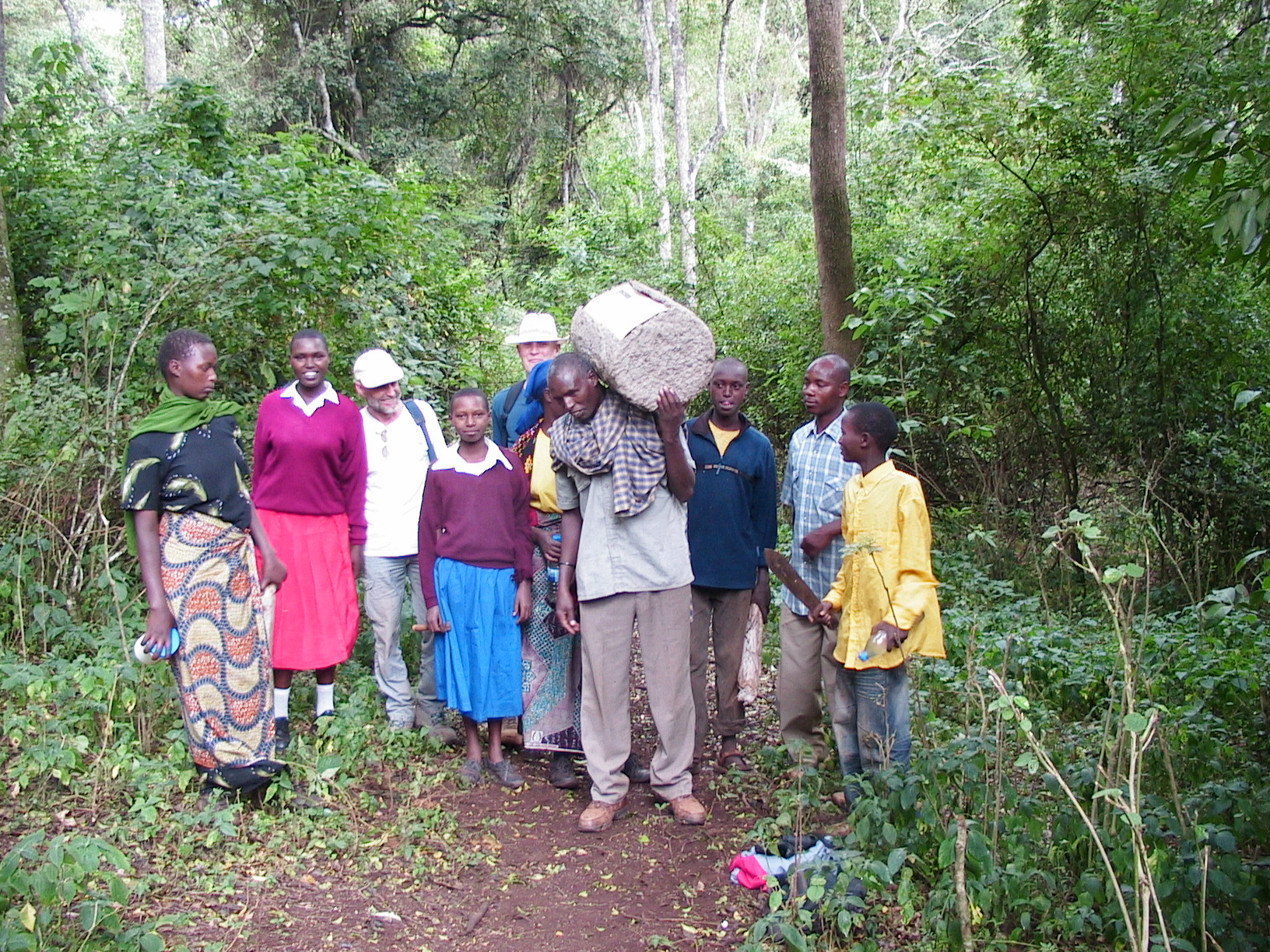 The development of my honey bee project with African bees began in 2005 with the wish to alleviate poverty and encourage more beekeeping. The project is based on continuity and follows my wish to counter the threatening hazards of landless and migrants into towns.

As a university biology teacher I know that there is a great potential in Tanzania for fixed-comb beekeeping. My past research there inquired into the feasibility of different types of containers for voluntary settling of passing swarms. The tested improved hives required the development of appropriate swarm management technique.

Proposing fixed comb beekeeping is not a backward step as recent scientific research has shown it is better adapted to the biology of honey bees.  Equipped with this knowledge makes for easier and safer handling of bees and collecting their honey is possible. In turn this permits home beekeeping in settled areas hitherto not possible. These techniques are developed alongside courses for training beekeepers including the construction of improved log hives.

The target group has changed. Now I concentrate on training literate people like doctors, clergymen, teachers, office personnel: people who are willing to be communicators later thereby spreading the word in their villages and parishes and in this way disseminating an attractive, better adapted bee keeping methods to newcomers who now include mothers and their adolescent children.

With regular twice yearly visits to Tanzania (2 month each time) I teach 2-3 seminars for a maximum of 10 participants in the Moshi and West Kilimanjaro area, in the larger Arusha - Manyara and Manyoni/Singida district and also in the south of Tanzania near Lindi. The interest is surprising while success is not governed at this stage in by the amount of honey harvested. This is because this is hard for an expatriate who is not fully resident to establish exactly the appropriate harvesting time: but it is established from the voluntary occupation rate of improved hives by colonies. This is important for it shows that the hives are a good abode for bees (and later for honey) if the area is rich in bees and there is forage for them. The occupation rate of the hives I have designed averages 72% and reaches almost 100% in good bee areas. The improved log hives we call Mhives (Manyara hives) and they easily beat wooden movable comb hives under similar conditions (the swarms settle of their own accord and “zero managing” afterwards).

Potential beekeepers are taught to  build their own improved log hives and shown their advantages as they are founded on continuity of indigenous methods and knowledge. It became clear that no rapid results in production of honey can be expected. This is because it was almost impossible to supervise the correct hive hanging and managing by the students when they returned to their villages. It became clear that a demonstration centre would be required to provide models of correct procedures. 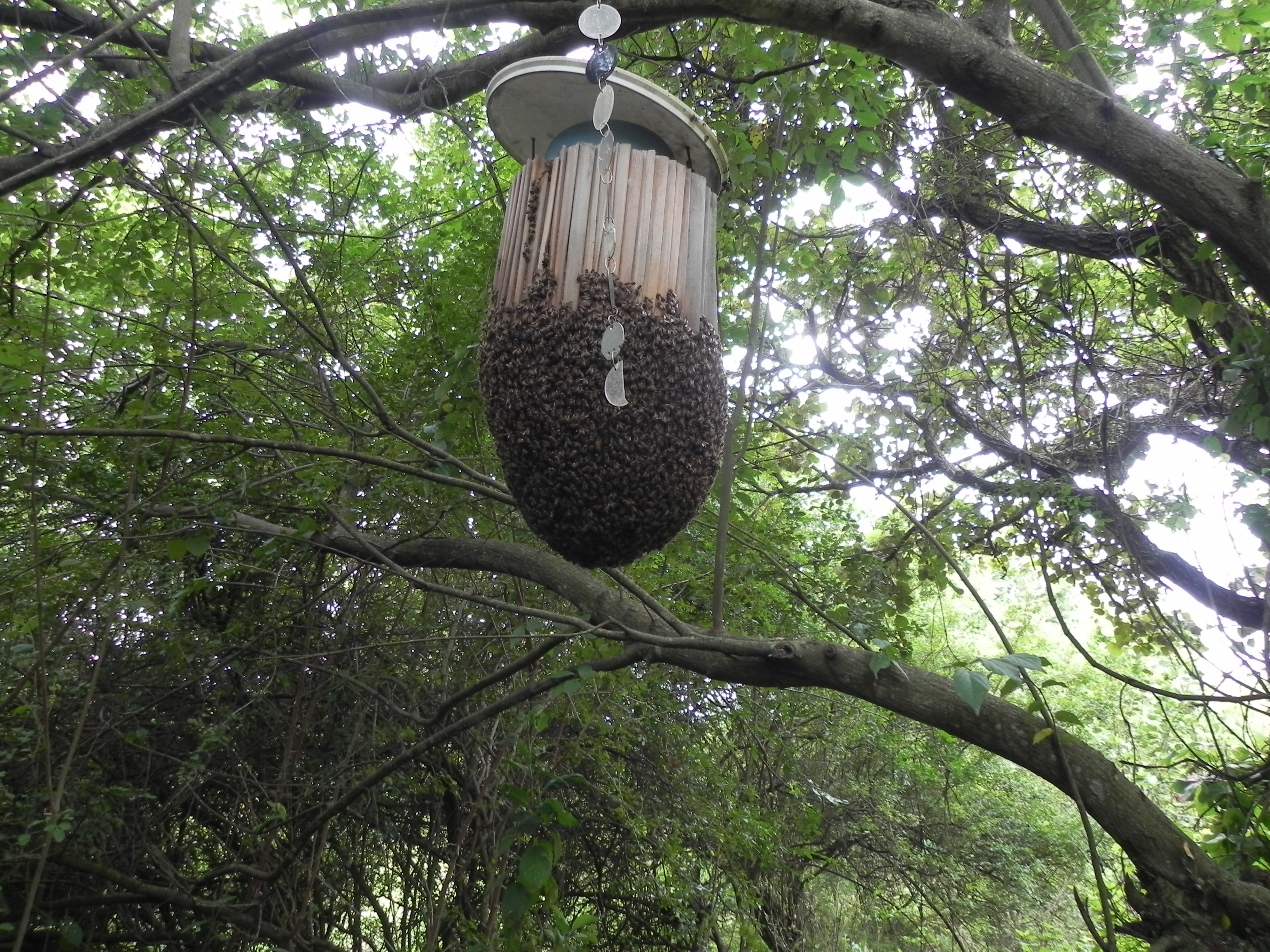 Research activity went into baiting at appropriate places and into testing traditional and historic managing techniques (a medieval skep technology, the Baden Dreh-Rumpf basket from the Black Forest is on test now employing  green cement based on rice husk cement). Other research concentrates on finding the best methods for processing honey (refining and separating wax from honey to obtain table quality to serve national markets) and involves continuously monitoring the improvements reached.

Demonstrations take place in training centres that are easy to reach by public transport and with the project car. There, workshop facilities and electricity are available and secure residency at the site for instructors and helpers. For safe work on open colonies – including the transport of bees at night - the ten former seminar localities fulfill these requirements (although the new active beekeeping has spread further in the mean time).

Two of the centres stocked themselves with bees from migrating swarms at one, nine hives were hung and attracted nine tenant colonies. One centre, with a shed built of local material (apart from a metal roof because of fire precaution) was provided in one night with a transported occupied hive from further away. (Other closer colonies would do mass-returning to their former familiar locations of the hive.) The future plan is not to build more sheds for bees but to have bees in hives distributed around on trees and to bring one temporarily into a room, or a collapsible construction, for the  safety of the students. The dangerous guard bees will then have retreated to their accustomed tree while the hive is opened. An historic technique, also efficient with African bees, the drumming out of older bees from a demo hive into a temporary cage, can also help to befriend the defending brigade after their release and return.

“There are currently no scientific techniques which can support traditional methods, and there are no experts who tour the villages to advise the beekeepers wrote Ntenga and Mungongo in an article in 1991. However the new developments and experiences that were lacking before are now found. Improved traditional hives with a biological basis for better management make it easier to handle belligerent African bees (Edrich 2011, 2013). In fact this proposition is not too different from a handling Wameru log hives which come in two long sections described by Chandler 1975 as allowing advanced form of beekeeping with better honey retrieval. 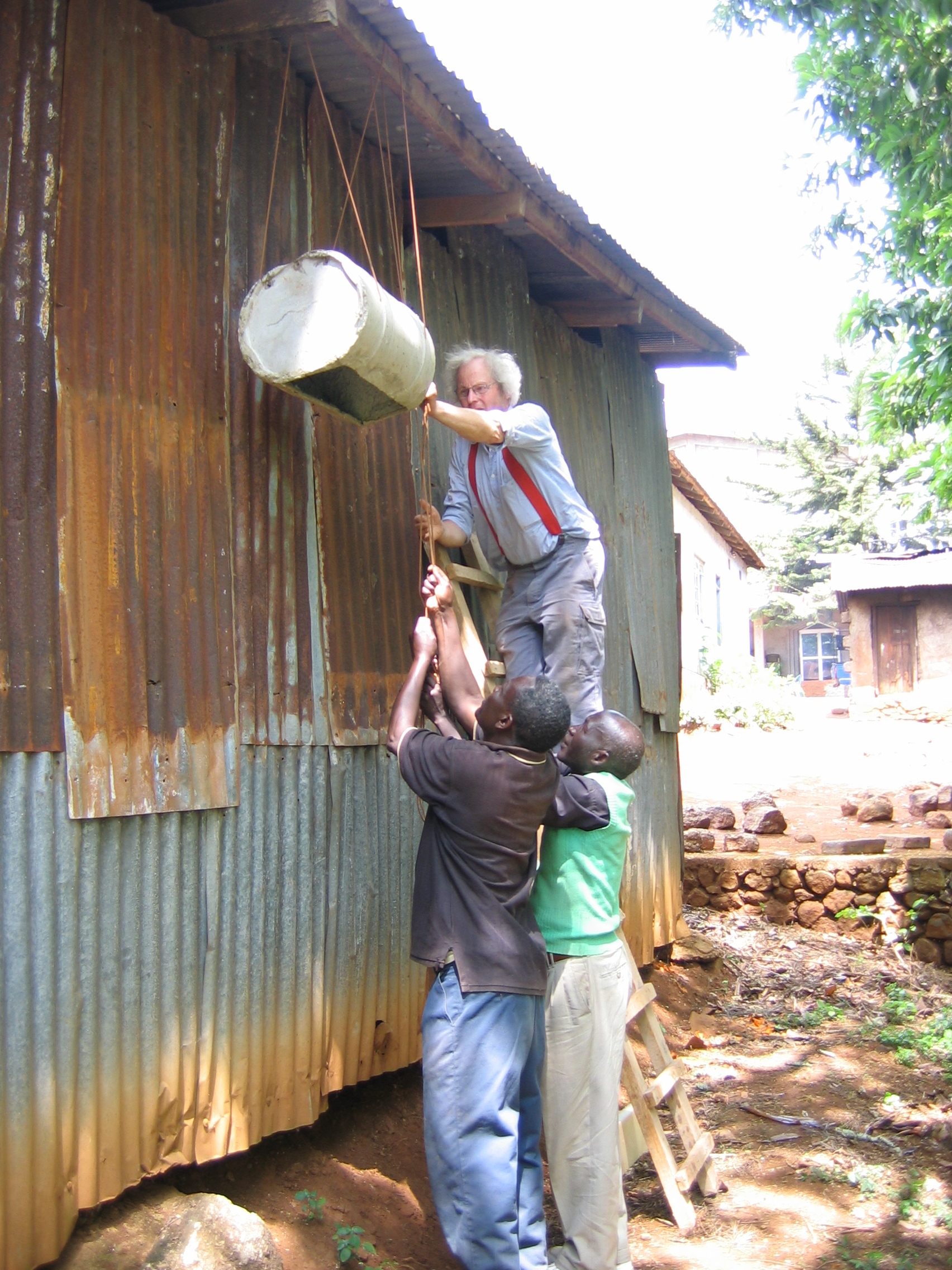 Nowadays with mature trees absent in many parts of the country, other materials for hive building are required. The newly developed shell hives made with green concrete in a similarly cheap, light mould that has a large lower harvesting gate otherwise encloses apart from flight holes the colony all around. The so far the these Manyara hives are durable, need no waterproofing and on the scores of cheapness, allowance of accustomed methods /technology, lightness and neatness to build, and to hang, which can be a problem with other hives, I see the swarms like to settle at the rate as in traditional log hives. Thus value convenience is gained and reliable returns can be anticipated.

In summary all non-commercial farmers and foresters should, in future, use nothing else but these improved hives and refuse any box hives with movable combs as they are hard to stock with bees, unreliable and complex to handle, not to mention that they are expensive in relation to the spending power of average folk in Tanzania and other similar regions of Africa.

Gnägi notes that soft friendly treatment for keeping and not letting colonies desert is a challenge and I can confirm this as being important and possible. Gnägi states further it would be unrealistic at the moment to think of honey production for world market. The price of honey produced by small holders is too high even now. For this price the beekeeper does not usually go to the trouble of refining it, because this would not be balanced even by selling it locally. Gnägi pleads for the defense of traditional cylindrical hives combined with the use of the indigenous knowledge. Traditional hives and technology was superior up untill now to other more elaborate approaches. He admits that some details could be changed if not suited to the local conditions. I have accomplished some such changes (Edrich 2010,2011) and the hives and techniques are now winning wide interest.