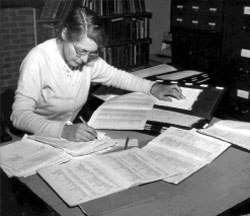 Eva Widdowson was born in South London on 12th June 1912. She became Eva Crane when she married James (Jim) Crane in July 1942.

Without doubt she became one of the greatest writers on bees and beekeeping in the 20th century.

Trained originally as a mathematician she was one of only two women reading for a maths degree at King's College London in 1933. She obtained a BSc in maths in two years, followed by an MSc in the then novel subject of quantum mechanics in 1935 and a PhD in nuclear physics in 1937. The rigours of her scientific training were never to leave her and she applied them to all her work.

Eva Crane had a towering intellect, a sharp, ever alert and thoughtful mind. Her somewhat austere lifestyle made her seem, to many, a remote and formidable figure which was not really the true picture. She was shy and self-effacing, but she did not suffer fools gladly and abhorred woolly thinking. 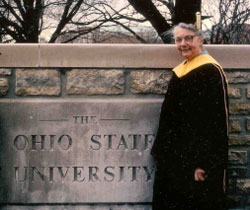 The legend is that Dr Crane's interest in apiculture was brought about when she was given a hive and bees as a wedding present in 1942.

Years later she was to say "It wasn't the bees I was attracted to at all. I am a scientist and I wanted to know how they worked".

Dr Crane's research was meticulous and she felt that the cross- referencing and recording of information, so that original material could be traced and used by succeeding generations, was a vital part of her work.

In her lifetime she had over 300 papers and articles published and she contributed many learned tomes to the shelves of bee lovers all over the world.

In January 1949 she established the Bee Research Association (BRA). From the beginning this organization was international in its aims and outlook but only became IBRA in 1976. 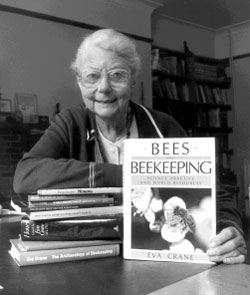 A lady of such academic and international stature should be remembered. One memorial is the book, Eva Crane - Bee Scientist, produced by Trust member Penny Walker, her friend and collaborator for almost 35 years, and fellow Trust member, Richard Jones, her successor as Director of IBRA. It is a book which the authors hope gives some respectful personal glimpses into the world of someone whose work was known to thousands.

The Trust in itself, as well as being Dr Crane's way of ensuring her work continues, is a memorial whereby it may be possible to help fund others who can build on the foundations of sound academic research laid down in her many publications.