Research and Publication of the Tel Rehov Apiary

Research and Publication of the Tel Rehov Apiary

Excavations began on the site in 1997 and concluded in 2017.  As a result, the following book is being  published:

Support for the publication of the chapters on the apiary is fully credited to the Eva Crane Trust, England, and this pre-publication issue is dedicated to Dr Crane.

Chapter 14 deals with the apiary. There are tables and maps showing the correlation of excavated strata to material discovered and an attempt to put the whole into a timescale.

Between 2005 and 2010 seven cylinders were discovered and these were confirmed to be hives after forensic analysis showed beeswax residue and pieces of burnt honeycomb. Some bees were even found and these proved to be of the Anatolian variety not the local Syrian type offering evidence of a very early package trade in imported bees.

In 2010 more hives were discovered in a sunken location. The apiary was located in the middle of an urban development and it is thought that this sunken location helped as a buffer between the bees and the citizens.  In all it is thought that the apiary contained over 200 hives. These were made of unfired clay mixed with straw and possibly dung. There was standardization of hives:  between  70 and 80 cms long, 40 cms in diameter, 5 cm thick walls, capacity about 57 litres. One end had a removable lid 30 – 32 cm in diameter with a bar handle. The other end had a more permanent disc with an entrance hole for the bees of about 5cm in the centre. The hives were stacked in three high rows the removable ends facing an aisle which went between the rows so enabling the extraction of wax and honey. These aisles had a hard (lime based) floor so that they could be easily used and kept clean. All the hives lay on a bed of soft earth for stability and were numbered. 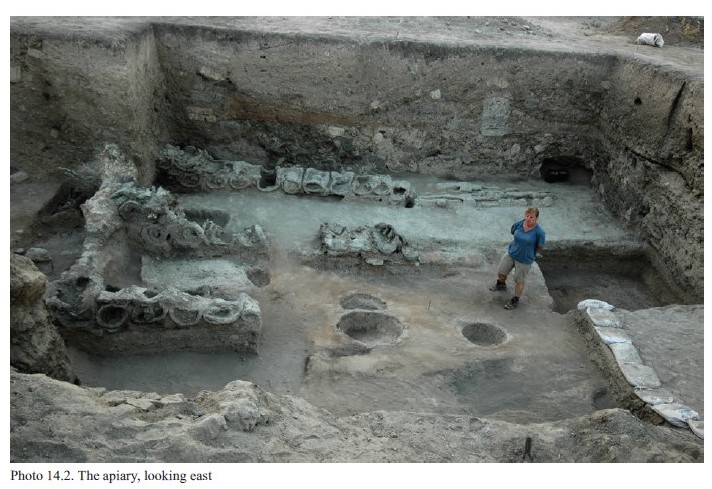 The apiary existed in late 10th and early 9th centuries BCE. It was destroyed by a possible earthquake followed by a huge fire which covered it with up to a metre of debris.

The report contains many interesting photographs of the hives at various stages of the excavation and the general layout of the apiary is clear.