Investigating the existence and fitness of the Irish native bees. Prof. G McCormack

Investigating the existence and fitness of the Irish native bees. Prof. G McCormack

Investigating the existence and fitness of the Irish native bees

It was generally assumed by many (e.g. researchers, government agencies, beekeepers, members of the public, conservationists) that Apis mellifera mellifera no longer persisted in a pure form in Ireland and furthermore, that no such subspecies of honeybee existed anymore in the wild. The reasons for this appear to be due to firstly to the Isle of Wight disease or Acarine disease that reportedly wiped out more than 90% of bees in the UK (and by extension, Ireland) after which time beekeepers imported bees from elsewhere, e.g. the Netherlands.  Some sources opinion that the loss was not so high but nobody really knows. A monk in the UK, Brother Adams is responsible for developing a mixed race bee called the Buckfast Bee which become very popular amongst beekeepers and is frequently imported into Ireland to this day. So, the genepool of the population of native bees such as existed in Ireland after the 1920s population crash were diluted with foreign genes from imported A. m. mellifera but also from A. m. carnica, A. m. ligustica and buckfast strains. Subsequently in the late 1990s Varroa destructor arrived in Ireland through imported bees. This parasitic mite reportedly laid waste to remaining wild colonies of honeybees as well as causing massive declines in managed colonies.  However, through our work with the Native Irish HoneyBee Society (NIHBS), which was established in 2012 to protect and conserve the native Irish bee, word had been received of the presence of  ‘wild’ honeybee colonies at various locations in Ireland and that at least some of these were dark in colour, or black, consistent with the appearance of the native honeybee.

Thanks to financial support from the Eva Crane Trust efforts were made to find colonies of Apis mellifera mellifera living in an unmanaged state and if found to confirm their subspecies/hybrid status through genotyping of mitochondrial and microsatellite data. After an article in the Irish Times in August 2016 the research group at NUI Galway received 123 reported cases of (what we call for now) ‘unmanaged’ honeybee colonies at various locations as summarized in Figure 1. Sixty-four colonies were sampled across 14 counties in Ireland.  Fifty bees have been genotyped to date of which 94% are pure A. m. mellifera. We have started to investigate survival of the colonies over winter and to date over 50% are active this Spring, while only 5% are confirmed dead (Figure 2).

Through this and other work it has now been established that Ireland has a population of pure A. m. mellifera and that some of these colonies are living in an unmanaged state. The status of these unmanaged bees in Ireland is different than in the UK where feral bees collected were of mixed origin. Further work is necessary to examine the longevity of Irish ‘unmanaged’ colonies some of which are reported to be active at the same location for periods well in excess of 10years. Whether these colonies represent the same honeybee lineage with descendant queens of an original native queen or repeated colonization of the site by local swarms (as has been found in the UK) needs to be determined.

Such colonies living without chemical treatment may provide a source of bees that have evolved to co exist with Varroa and if so are a very important stock for beekeepers and for biodiversity in Ireland. Regardless of whether they are Varroa tolerant or not these bees highlight a purity of A. m. mellifera in Ireland, an important population for the conservation of this subspecies under threat over much of Europe. On the basis of this research we will seek further funding to extend our research on this population. 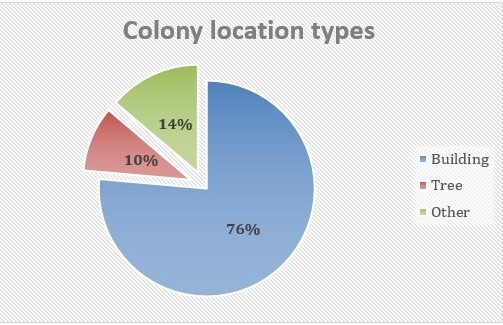 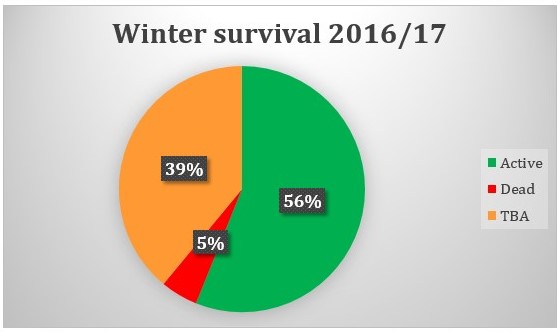