One of the main threats to bee health is the proliferation of pathogens and parasites infecting both managed and wild bees. Diseases are often the tipping point collapsing bee populations already exposed to human-induced rapid environmental changes. While there is evidence of some pathogen transmission from managed to wild bee populations, the prevalence and mechanisms behind this phenomenon are largely unknown. Moreover, despite the great advances made for understanding the effect of plant-bee networks for the stability of the ecosystem, we know virtually nothing about how the pathogen-bee network is organized or its consequences for bee population dynamics. The overarching aim of our study is to investigate the mechanisms underlying the pathogen transmission patterns in pollinator communities. Recent advances in DNA sequencing may allow us to get a glimpse of this problem for the first time.

Building the first Pollinator-Pathogen interaction network: We sampled pathogens in eleven common pollinators in Doñana National Park, Andalucia, Spain (Fig 1). Pathogens were identified by using Deep RNA sequencing. We applied a metatranscriptomic approach for pathogen screening as described in (Schoonvaere et al 2018). With this approach, the goal is to target different groups of pathogens: eukaryotes, viruses and bacteria. Collected specimens were kept on dry ice in the field until they can be placed in the -80°C freezer. Ten specimens of each species per site were pooled. RNA was extracted using the standard phenol chloroform method. Total RNA library preparation was outsourced and sequenced using novaseq6000 with an output of 15Gb/sample. The resulting data was analyzed following the SAMSA metatranscriptomic analysis pipeline to summarize raw annotation results, identifying abundant species and significant functional differences between metatranscriptomes (as described in Westreich et al 2016). By using this novel metatranscriptomic approach, we could detect the presence and pathogenicity of over 100 bee associated viruses, microbes, and metazoans in our bee samples and build the first complete pathogen-bee networks. 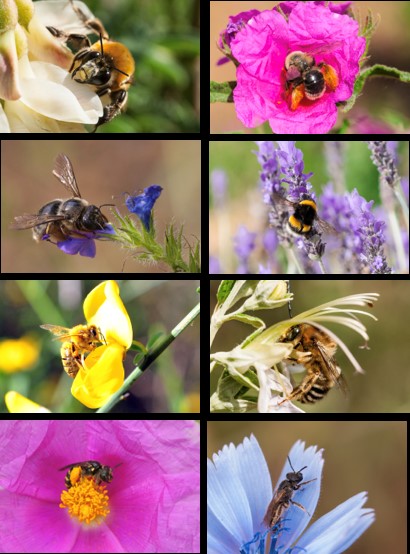 The main players: The first striking result is the dominance of the network by two interactions, both with the managed honeybee. First, the most commonly detected pathogen on honybees was an Iflavirus, followed by the fungus Nosema. Interestingly, both pathogens were present in all eleven bees screened, but in lower quantities.

Another main player was a bacteria of the genus Wolbachia, which was present in larger quantities in half of the screened bees such as Xylocopa cantabrita or Flavipanurgus venustus (but only present in low quantities on the honeybee).

A complex network of interactions: Our current understanding of the maintenance of pollinator communities assume that pollinator populations are largely regulated by bottom-up effects of plants on pollinators and fail to consider potential top-down effects on pollinators from antagonist interactions such as pathogens. However, pathogens have been identified as candidates for explaining the collapse of pollinator populations. We found that the pollinator-pathogen community is complex and some pathogens are widely shared among wild bees (Fig 2). 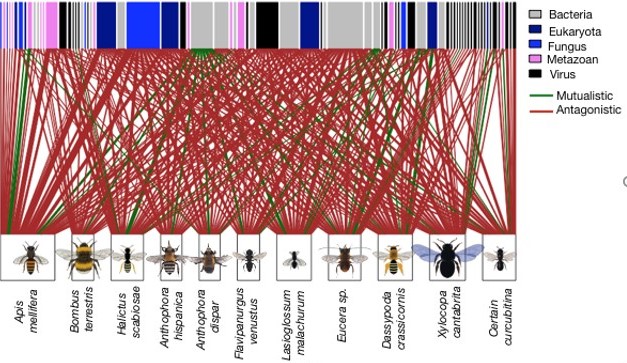 Fig.2 A metatranscriptomic approach for pathogen screening in 11 wild bees from Doñana National Park. Each bee is connected to the microorganism identified as antagonist or mutualists showing a highly connected network. Interaction strength is in the log scale.

The network of interactions is rich with a connectome of 0.32. This means that from all possible links, more than 30 percent were stablished. This implies that each bee species interacts with a mean of 11.6 potential pathogens. Those numbers are higher than for the typical plant-pollinator networks, indicating a higher than expected degree of generalization. However, we do not know yet if those pathogens were infecting bees or using them as vectors.

Implications of the network structure: Two properties of the network are especially relevant for understanding bee pathogen dynamics. First, niche overlap (a measure of how many pathogens share bee species) is moderately high (0.46, ranging from 0 to 1) indicating that most bees share pathogens. As a consequence, the network does not present strong modules (Fig 3) indicating pathogen spread can be fast across all the species. 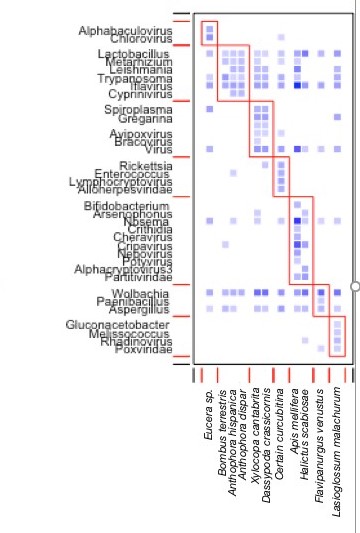 Fig.3 The pathogen-bee network depicted as a matrix with microorganisms in rows and bees in columns. We can see that despite a seven modules emerge (in red squares), those are weak and most pathogens are shared across different bee species (i.e. occupy the full row).

Further work: Using this project as a starting point, the next step is to test if (i) more diverse and structured communities will lead to a suppressive ‘dilution effect’ on pathogen transmission rates, (ii) disentangle if some bee species will function as vectors, even when those are not infected themselves, and (iii) test if the phylogenetic structure of bee communities is related to pathogen sharing. If so, we expect that disease pressure will be stronger for bee species with closely related managed species. The time is ripe to incorporate disease ecology into bee conservation.

Acknowledgements: The work was conducted by Cristina Botías, Elena Gómez Díaz and Ignasi Bartomeus at the Doñana Biological Station (EBD-CSIC). The authors would like to thank the Doñana National Park and LEM (Laboratorio Ecología Molecular; EBD) for the access to their facilities and to Curro Molina for bee identification. We would also like to sincerely thank the Eva Crane thrust for their support with this work.