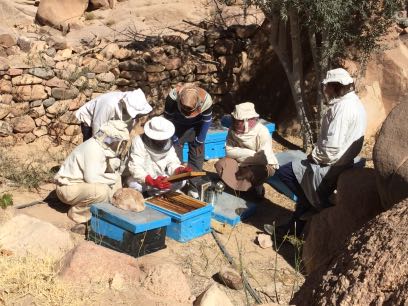 Over the past 4 years the Eva Crane Trust has supported the work of The Makhad Trust, a UK based charity which has carefully organised and managed training opportunities for beekeeping in the South Sinai.

The Makhad Trust works to sustain the environment, lifestyle and heritage of the Bedouin tribes in the mountains and deserts of Sinai, Egypt, a region of the world where there is a powerful relationship between the environment and the spirit. This is a review of the 2018 – 2019 Beekeeping Training Project.

Previous updates about this project can be seen on the Eva Crane Trust News pages.

The fourth year of this project to train new beekeepers started in October 2018 with a meeting between the beekeeping teacher and his 6 new students. Salem Hussein Salah Abu Maghnam has been working for many years for Sheikh Sayeid, a Beekeeper with a very large business to the West of South Sinai and also to the South of Cairo. Salem worked for him looking after many hives in different locations and had become quite an expert. This project is enabling him to fulfil his dream as well as achieving our aims of helping more new beekeepers.

The students were chosen from a wider area in order to spread the benefits of bee pollination and also so that there is not over population of bees in one area where they would compete for available food. All the beekeepers have orchard gardens or access to one. The Bedouin have been cultivating crops in their gardens in the area around Mount Sinai for around 1500 years, from the time when the monastery of St Katherine was built in 565AD. The Bedouin here grew almonds, olives, apples, pears, pomegranates, quince, grapes, apricots, walnuts, and vegetables, to supply the monastery and their families. Many of the gardens are high up in the valleys above the town at around 1800m, and are only accessible on foot or by camel. The geography of the area has produced a unique habitat with plants, particularly herbs, that are found nowhere else in the world. There is sometimes snow in winter, but it is cooler in summer than in the surrounding deserts, and this enables them to grow crops usually found in more northerly countries.

During the last 40 years, the gardens were gradually abandoned, partly due to a long drought and also because work in the tourism industry was more lucrative. Since the Arab spring, and combined with international security concerns the tourist industry in the area has collapsed, so the Bedouin have been reviving their gardens to bring income. Our wells restoration project has enabled over 200 families to return to this traditional pastoral life and beekeeping is an important part of that. The new beekeepers have to be chosen with the following criteria in mind;
*they must have a garden or access to one
* the garden must not be in an area where there are already lots of bees hives
* gardens where there are no bee populations should be prioritised
* they must be practical and responsible people, able to attend all of the program to the end.

The training course met in a classroom built beside Salem’s father’s house in the town of St Katherine’s for their theory training and construction of the frames. 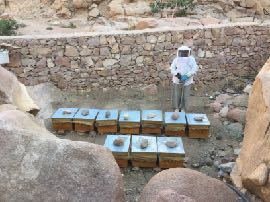 Salem arranged to take the students to Wadi Ferien during the winter, which is at a much lower altitude and so the bees there were active gathering honey and the students could get some hands-on experience. In March/April Salem arranged collection of the new bee swarms from a supplier in Cairo. Each new beekeeper has 10 hives and 10 swarms. The bees were kept in the town for a few weeks to settle down on their journey before making their way up to the gardens by camel.

There were good rains in February this winter, over the mountain areas, though none on the plains. This has meant that wells have had good water this summer, people have planted vegetables as well as tending their orchard trees and there are many more wild herbs and plants for the bees to feed from.

Salem reported that there were very few problems this year for the students. Most of the students had raised their hives up above the ground, on rocks or on metal frames, to protect them from ants. Previous students had trusted to luck at first but experience had showed them how necessary the precautions are and the new students took it on board from the beginning.

The best results were from Salem Ramadan in Wadi Arbaeen. This valley is slightly higher than St Katherine’s and his bees are in one of the gardens at the end. There were good flowers in this area as well as orchard trees and the monastery has large olive groves here so there was plenty of nectar for the bees.

Due to the abundance of flowering plants and the types of plants, Salem has been able to sell his honey for 600le per Kg or £30/kg. His honey is considered highly 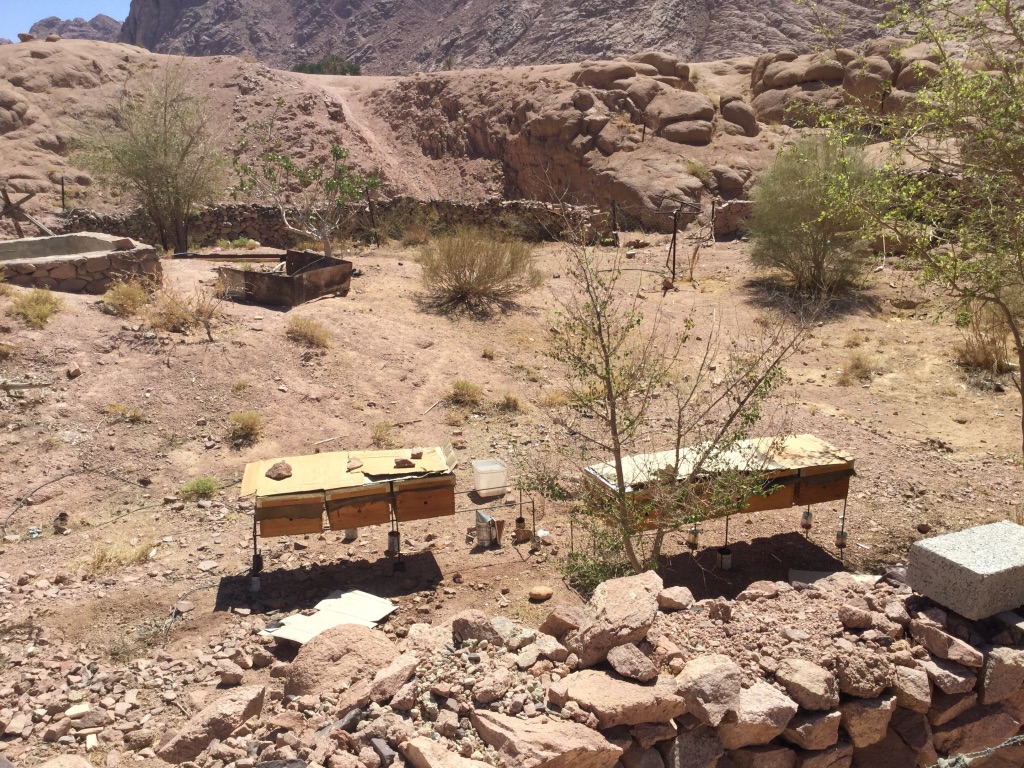 medicinal because of the abundance of medicinal herbs they have been gathering from. Each area has its special flower. In Farsh Rumana they have a herb called Hut-mun, in Arbaeen there is Zarhu (hawthorn) and in wadi Itlah there is Zacheran and in wadi Buliea they have Gartudm. Selem has learnt the best places to place hives and has learnt more specifics about beekeeping in this area for himself, by observing his students, so he has increased his experience.

Selem is still visiting his students regularly to ensure they are still doing fine. His previous students are doing well this year too. Those students who lost hives due to the lack of water, the ants, the beekeepers and the lizards, replaced some swarms from their existing swarms as Salem had taught them. Some bought new swarms too, from Selem when he went to collect the bees for the current course. So all 26 beekeepers are working well

Hazards for the bees and the beekeepers include lizards, ants, wasps (or hornets) and bee-eater birds. The bee-eater birds were more of a problem than lizards as they fly overhead looking for bees and whistling.

When the bees hear the whistling they won’t come out of the hives and so don’t make so much honey. The birds appear at the same time as the wasps come but fortunately it is only for a couple of weeks.

Salem, the teacher, called to make regular checks on all his students and their hives once they had received them. Salem has also said that he is still available for 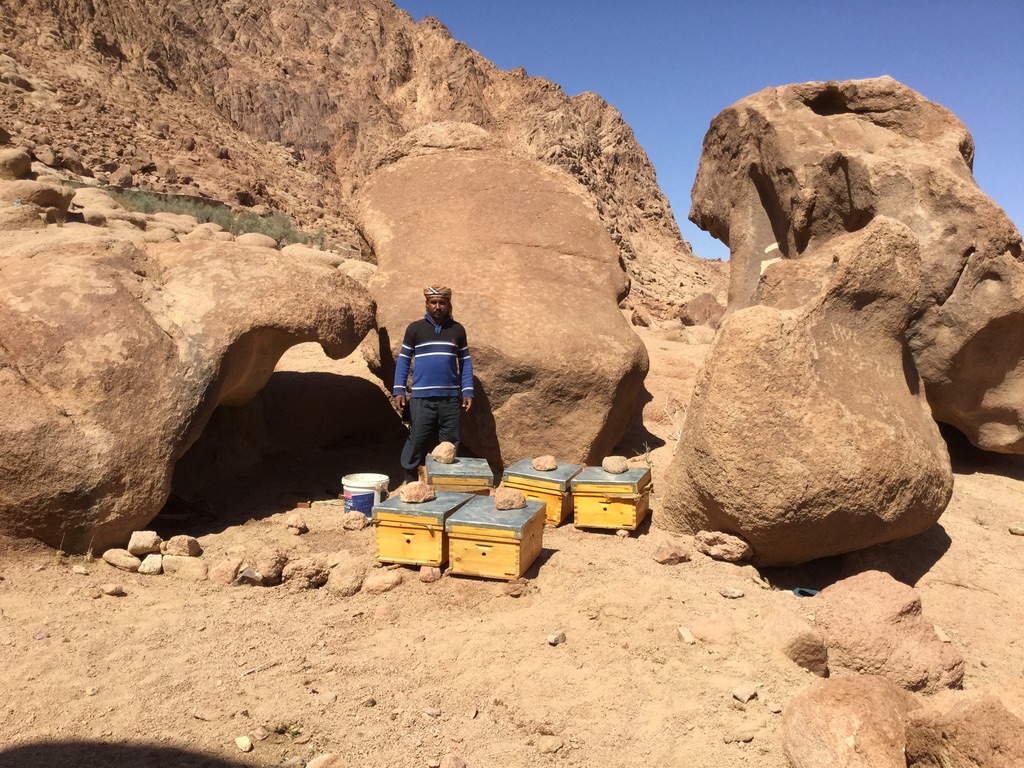 advice and help now that the students have finished the course. He is producing typed notes now for this course as we provided him with a laptop from our sister charity ITSA (IT Schools for Africa) which recycles old computers from schools and businesses to send out to IT labs in Africa. All the feedback from the students was positive.

All the students said they were extremely grateful to their sponsor the Eva Crane Trust for enabling them to become beekeepers, and asked for their thanks to be passed on the Trust.