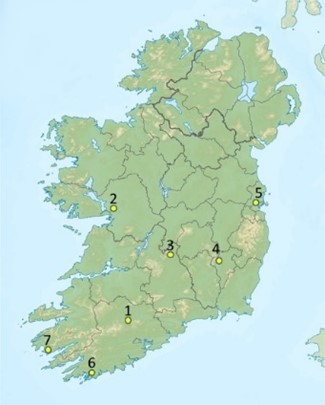 Honey bees harbour a collection of microbes called the microbiome. The microbiome co-evolved with the honey bee over millennia. Like in humans and animals, this gut microbiome is important for honey bee health. Gut bacteria contain enzymes that honey bees lack, that can breakdown complex sugars quickly, which helps the bee benefit from their diet. Having a diverse gut microbiome makes it harder for pathogenic bacteria to infect. Previously we carried out a microbiome survey in a remote peninsula in West Cork, Ireland, on 4 thriving and 4 non-thriving hives in a single apiary. The non-thriving hives had a gut microbiome of lower diversity, dominated by bacteria involved in pollen degradation, and they had more bacteria associated with diseases1. The thriving-hive microbiome was more diverse, like a healthy ecosystem, had more bacteria involved in breaking down sugars, and more bacteria associated with honey bee health.

Figure 1. Location of the 6 apiaries where honey microbiome
profiling was performed throughout the 2019 season.
Additional bees werecultured from two hives from a
seventh apiary, located in South Kerry, Ireland.

In this project, we profiled the microbiome in returning forager bees from 10-12 hives in each of 6 apiaries across the southern half of Ireland, at early, middle and late time-points in the 2019 season. It was a lot of driving! The hive locations are shown in Figure 1. Note: to maintain apiary/beekeeper confidentiality, locations are approximate only. Total bee DNA was extracted from 970 whole bee (forager) samples plus 48 hive debris samples,
and the microbiome was profiled by 16S gene PCR and amplicon sequencing.

The honey-bee microbiome was distinct from that of the hive debris (Figure 2) confirming that the microbiome data collected are truly derived from the bee rather than the physical hive environment. Despite the wide range of geographical locations and forage available, apiary site was not the strongest determinant of the honey bee microbiome, despite the range of local habitats of the participating apiaries (Figure 2). There was clear clustering of the honey bee microbiome by time-point across all apiaries, independent of which apiary was sampled. The potential forage effect was also strongest at the second timepoint (June-July) when the apiaries also displayed greatest difference in microbiome ecological diversity.

We identified bacteria in the forager bee microbiome sequence data that correlated with hive health as measured by hive counts of larvae, bees, and honey production. We identified correlations between several bacterial species and honey production. Perhaps surprisingly this included most of the lactobacilli, while microbial species belonging to the Apilactobacillus genus abundance were positively correlated with honey production. We cultured a representative strain of this species from a thriving hive, and have begun to study its biochemistry. We isolated a further 266 single colonies (52 aerobic, 82 anaerobic, and 132 microaerophilic) which we identified by PCR sequencing, as belonging to 20 species. Some of these correspond to species that associate with hive health metadata, potentially paving the way for their development as natural agents for promoting honey bee health.

We have generated the first data from longitudinal sampling of the honey bee microbiome across a single season in multiple apiaries in southern Ireland. These findings support the hypothesis that the global honey bee microbiome and its constituent species support thriving hives. We will continue to investigate this using microbiological and genetic analysis of our isolate collection.