Urban beekeeping is becoming ever more popular, due in part to increased societal awareness of bee decline and people wanting to do something positive for bees. Urban landscapes offer a range of resources for bees, including nesting sites for wild bees, and year-round foraging opportunities for both wild and managed bees. Honey can successfully be produced from urban hives, and demand for locally-produced honey is increasing. In Dublin, Republic of Ireland, urban beekeeping has become common among amateur beekeepers and institutions wanting to improve their “green” image. In addition, wild bees (bumblebees and solitary bees) are relatively common across the city. However, relatively little is known about urban bee health, what they forage on, nor how they are affected by urban habitat structure.

This pilot project aimed to investigate bee health and pollen foraging in Dublin.

We selected nine sites across Dublin (Figure 1) where honeybee hives were already established and maintained by local beekeepers, and into each of these sites, we introduced a small, commercially reared Bombus terrestris audax colony (Figure 2). The sites were selected to represent a gradient of urban landscapes, according to the surrounding habitat, in terms of the amount of urban impermeable surface in the surrounding 500m radius and amount of green space/parkland and residential housing in the surrounding 1500m (Table 1). 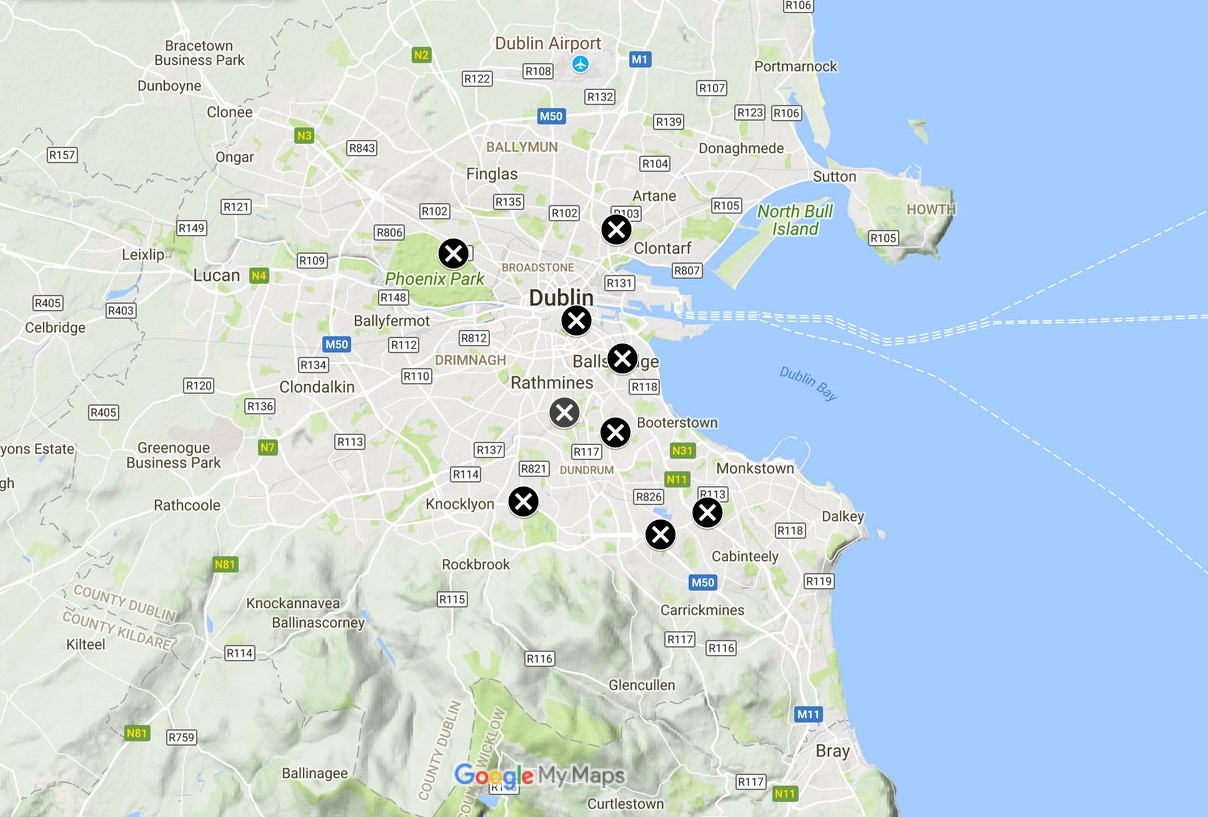 Figure 1: Locations of the nine bee sites in Dublin 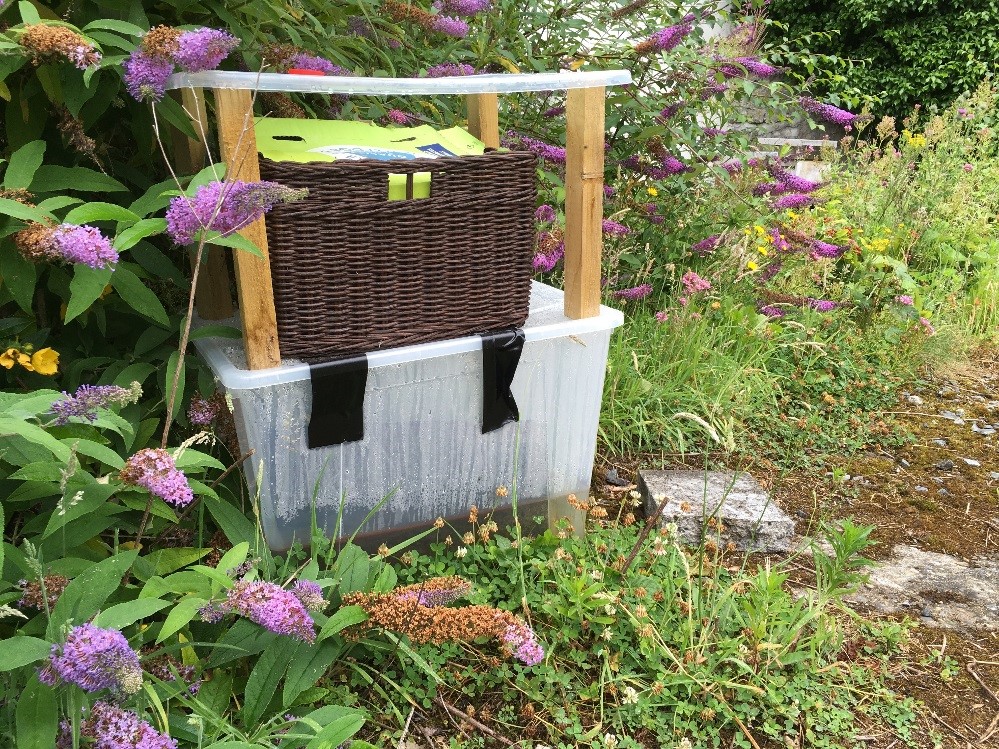 Figure 2: a) Bombus terrestris nest (protected from damage by being placed in a wicker crate, raised from the ground, and protected from rain), b) Apis mellifera hive on the roof of Trinity College Dublin. (Photos by Fergus Chadwick and Ciara Duffy)

Table 1: The surrounding habitats used to select sites (Habitat Type), the radius at which their extent was measured (Radius, m), and the range of percentages of each habitat type surrounding the selected sites (Range, %).

Before installing commercial Bombus colonies in field sites, all were weighed and screened for trypanosome Crithidia and microsporidian Nosema loads. Following installation, colonies were checked once a week and observations of nest activity were made for 60 minutes per colony per week. During this period, workers were captured returning to the nest and pollen sacs removed. One pollen sac per bee was screened for Crithidia and Nosema, and the other analysed for pollen diversity using light microscopy. After five weeks, when colonies had grown to near maturity, but had not produced reproductive individuals, colonies were weighed, brought into the lab, screened for Crithidia and Nosema, and destructively sampled. The difference in initial and final colony weight was recorded as percentage colony growth. Bees were removed from each colony and worker thorax size was measured using digital callipers. Within nests, five cell types were identified: nectar, pollen, larvae, pupae, or nothing and counted.  For each cell type, damage by wax moth larvae, disease or lack of provisioning was noted. The percentage of in-tact “healthy” cells was recorded as an indicator of overall colony health.

During the same period, pollen traps were installed on one honeybee hive per site, and pollen diversity was determined using light microscopy.

Table 2: The relationship between the % Urban Impermeable Surfaces and various measures of Bombus health

Table 3: The relationship between % Residential Housing and various measure of Bombus health

Table 4: The relationship between % Parkland and various measure of Bombus health

Pollen analysis has yet to be completed.

This project has provided the first insight into the health of urban bees in relation to urban habitat structure. The amount of impermeable surface, residential housing and greenspace/parkland in the urban landscape all appear to be associated with the health of commercial Bombus terrestris colonies.

In terms of worker size, bees were bigger when there were more built up areas, and smaller when there was more parkland.  This is slightly contrary to expectations – we would expect larger bees where there is more green space, and presumably more floral resources and thus pollen availability. However, many urban parks do not offer much in the way of floral resources, being comprised of amenity grasslands and trees which were no longer in flower during the study period.

In terms of the overall colony health, there were more healthy cells when there was a greater extent of impermeable surfaces in the surrounding 1.5km, but colonies more were infested with wax moths when there was more residential housing. This supports previous studies which have shown high levels of wax moth damage in urban residential areas (Goulson et al. 2002)(Goulson et al. 2002).

Further analyses are required of pollen collected by bees – these findings will help us to understand what urban bees are foraging on, and potentially to inform urban planting decisions.

This study represents a pilot investigation into the relationships between urban landscapes and bees, using just nine colonies of commercially reared Bombus terrestris, and results should be interpreted with caution and not generalised to all wild bees. However, the results of this study will inform further research in this area.

This work was led by Fergus Chadwick, supervised by Prof Jane Stout at Trinity College Dublin. We are grateful to Eoin Dillon, Hallie Tanner and Maximilian Fursman, for help with fieldwork and disease screening, to Dearbhlaith Larkin from Maynooth University for disease screening protocol and training, to Dara Kilmartin for pollen analysis, Archie Murchie for help in securing Bombus colonies, and to all the beekeepers who collaborated and allowed us to sample their hives.

We would like to sincerely thank Eva Crane Trust for their generosity in supporting our work.