The Makhad Trust works to sustain the environment, lifestyle and heritage of the Bedouin tribes in the mountains and deserts of Sinai, Egypt, a region of the world where there is a powerful relationship between the environment and the spirit.  In Arabic, the word ‘makhad’ means a meeting place, and as well as giving practical help, the Trust facilitates journeys in the Sinai for visitors from UK during which they interact with, and work to support, their Bedouin hosts. Such journeys foster a sharing of skills and resources and are a melting pot for cultural exchange. As a result of the journeys, 18 small dams have been built in the high mountains, to catch and retain the little rain that falls. The Trust also supports the Bedouin through a variety of projects, the largest being the Well Restoration Project.  We have also started a library in St Katherine’s for women and children, a project to teach orphan children about growing herbs, built a school in the desert and supported a Bedouin woman to set up a business selling hand crafted beaded bags made by local women. 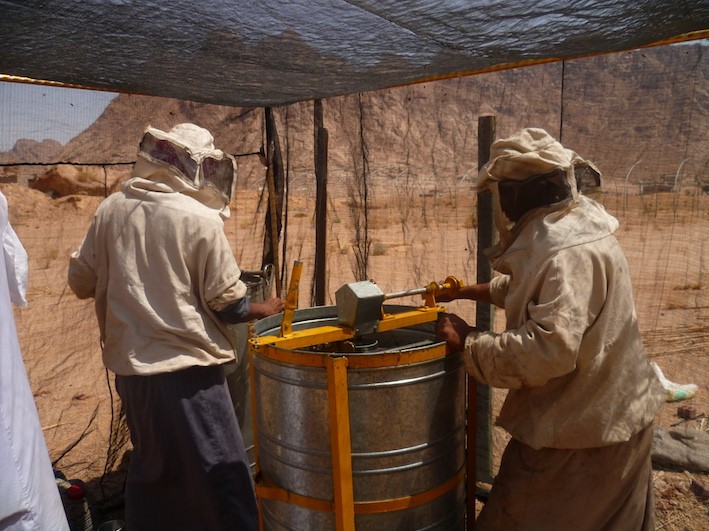 The Makhad Trust Beekeeping Training Project grew out of a need to find ways of providing self-sustaining employment for the Bedouin of South Sinai, specifically the mountain tribe around St Katherine’s call the Jebeliya.  They already have a long history of orchard agriculture in their mountain gardens and they used to keep bees for pollination and honey.  Over the last 30 years the gardens had mostly been abandoned due to a severe drought and the easy money provided by the tourist trade.  Since the Arab Spring uprising of 2011, tourism has declined and some rain has fallen, so many Bedouin have been looking to their gardens as a source of nourishment and income.  Most of the wells for the gardens had gone dry so the Trust was asked to help finance the restoration of the wells, which we have been doing since 2007.  To date we have restored 168 garden wells and these are now producing good crops of almonds, olives, apples and many orchard fruits plus vegetables.  Other Bedouin, whose wells were not so difficult to restore, have carried out their own restorations.  The result is that the wadis in the mountains around St Katherine’s have gradually been turning green again.

However we recognised that all these orchard trees need pollinating and that a productive garden is not enough to support many large bedouin families and that beekeeping is a very important way to increase family incomes.

We had been looking for a good teacher and a sympathetic funder for around 6 years when both came together at the end of 2015. Mousa came forward and offered to teach beekeeping for our first course.  He has a beautiful garden just outside St Katherine’s town and has kept bees since he was a small boy. His father, Dr Ahmed, is a renowned Herbal Doctor, carrying on the tradition from his father and grandfather and before. Mousa had the necessary education and background to take this project on. 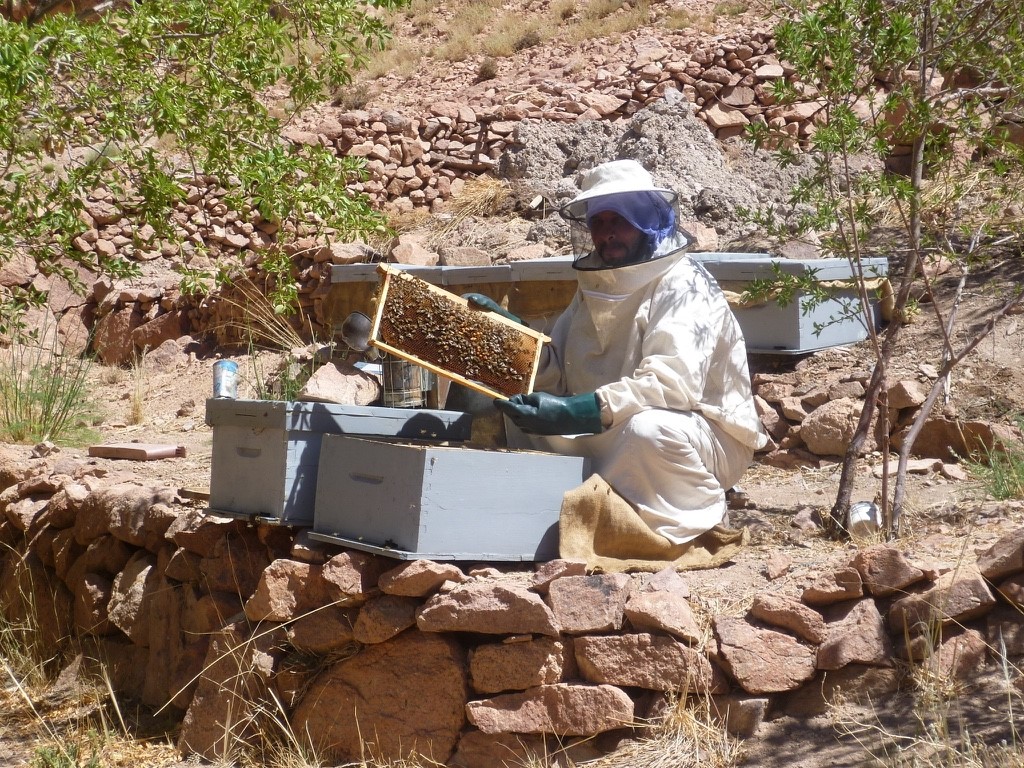 Mousa selected 5 Bedouin who all had productive gardens and were keen to learn beekeeping. They started the training with theoretical skills and practical demonstrations in Moussa’s garden. They learnt how to construct their hives and about all the equipment necessary. In February, Mousa went to buy and collect the swarms of bees from a renowned beekeeper near Cairo. The bees were kept at Mousa’s garden for a couple of weeks to give them time to acclimatise before going off to each trainees garden.

The bees have been feeding on the pollen provided by almond, apple, pear, pomegranate, olive, pistachio, grapes, apricots, walnuts, and quince. There are also vegetables like sweetcorn, beans and salad leaves for them. However the other big source of pollen are the thousands of wild herbs growing all over the mountains. Their strong fragrance gives the honey its distinctive flavours and its alleged healing properties. Sinai honey is much sought after and is used as a medicine by the Bedouin so there is no problem selling the honey for very good prices.

To our knowledge, the Bedouin have never used chemicals or pesticides on their gardens, partly because they could not afford them, and so everything is organically grown.  They have a huge respect for nature and their landscape and are naturally suspicious of unnatural methods.

The first year has gone well with the Bedouin trainees learning all they needed to get started with the bees.  They made 10 hives each and had 10 swarms each.  In July the first crop of honey was ready and they used a large centrifuge to spin the honey out of the combs in the frames.  The honey was put into jars to sell through Mousa’s contacts and from the Monastery of St Katherine’s.  Other jars had already been sold before they were produced, as people had reserved their jars.  The trainees are now preparing their hives for winter, with cold weather protection and food for the bees to over winter.  Somewhat surprisingly, given that this is Egypt, cold can be a real problem. The town of St Katherine’s is at 1600m and snow and ice for weeks on end is not unusual. Their winter weather is not so dissimilar from UK winter weather, although they do have a shorter winter than we do.

During the year-long training, the UK Project Manager made regular visits to check on progress, which at all stages seemed to be going very well.

In September, Mousa was offered a job at the monastery and was not longer able to give the time necessary to train the next class of novice beekeepers, but Salem stepped into the breach.  Salem and his family have gardens in the high mountains and Salam was keen to choose other high mountain garden owners so that they could ensure there were bees there to pollinate these gardens.   The gardens are about 300m higher than St Katherine’s so even colder in winter but more moderate in summer.

It is in these gardens that the traditional culture of the Jebeliya tribe stems from.  Unlike most Bedouin tribes who have their roots in nomadic wanderings through the desert, the Jebeliya tribe have been living a transhumance lifestyle with summers spent in the high mounta 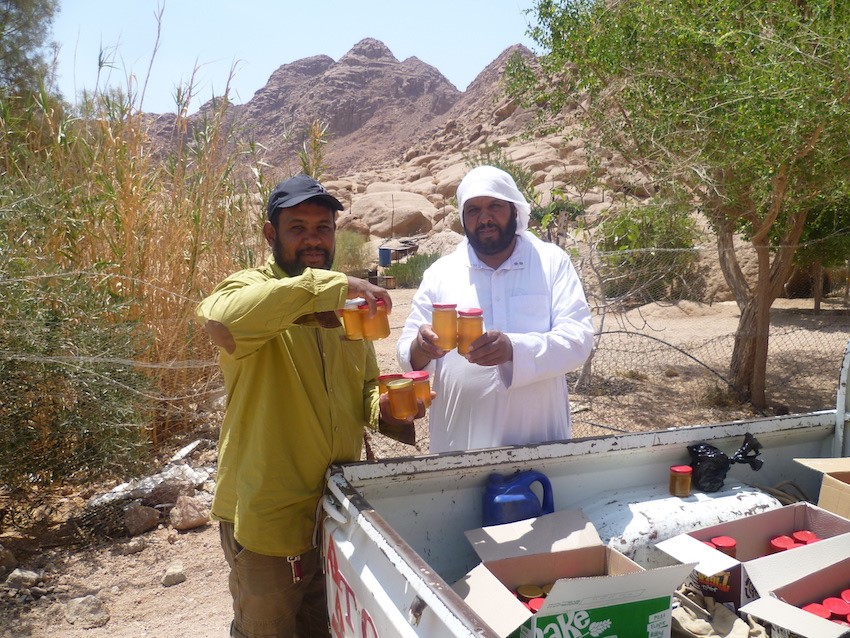 ins and winters spent in the warmer valleys.  They were growing food for the monastery for hundreds of years so many of their gardens are ancient, dating back 1000 years in some cases. When the Bedouin abandoned their gardens 20 years ago they started turning their back on their traditional culture and many of the older Bedouin were concerned that their culture and knowledge of the mountains would be lost.  The Well Project allowed the Bedouin to restore their gardens and keep the old stories and wisdom alive.  The Beekeeping Training Project is playing its part in keeping links with the landscape, the sense of place and wisdom of this indigenous people.

We hope to keep the Beekeeping Training Course running for the next 6 years at least, when we will have facilitated around 36 new beekeepers for the area.  We are mindful of not surpassing saturation point in this seemly barren landscape and so will be monitoring how much the honey the bees produce as a marker of how much food there is for them.

This is a fledgling project in a new direction for the Trust and we will all be learning as we go. We are looking forward to instigating a thriving honey business in South Sinai.

We would like to thank the Eve Crane Trust, on behalf of the Bedouin trainees and all garden owners benefiting from the pollination, for this very generous donation.