Here is the latest news from the Sinai, as Helen Cranston from the Makhad Trust and the Bendouin beekeepers report on the ups and downs of the last year and how they have benefitted from the financial support provided by the Eva Crane Trust.

The training year started in September 2016 with a meeting between the new beekeeping teacher and his new students. Salem Hussein Salah Abu Maghnam has been working for many years for a Beekeeper with a very large business to the West of South Sinai and also to the South of Cairo. Salem worked for him looking after many hives in different locations and had become quite an expert. However, he wanted to set up his own hives and then start teaching other beekeepers in his home area. This project is allowing him to fulfil his dream as well as achieving our aims of helping more new beekeepers. 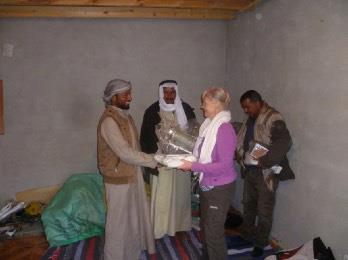 The students were chosen because they have gardens in the mountains where pollination is needed for hundreds of gardens.

The Bedouin have been cultivating crops in their gardens in the area around Mount Sinai for around 1500 years, from the time when the monastery of St Katherine was built in 565AD. The Bedouin here grew almonds, olives, apples, pears, pomegranates, quince, grapes, apricots, walnuts, and vegetables, to supply the monastery and their families. Many of the gardens are high up in the valleys above the town at around 1800m , and only accessible on foot or by camel. The geography of the area has produced a unique habitat with plants, particularly herbs, that are found nowhere else in the world. They have snow in winter but it is cooler in summer than in the surrounding deserts, and this enables them to grow crops usually found in more northerly countries.

In recent times the gardens had been abandoned, partly due to a long drought and also because work in the tourism industry was more lucrative. Since the Arab spring and international security concerns which have caused a collapse in the tourist industry, the Bedouin have been returning to their gardens for a reliable source of income. Our wells restoration project has enabled 187 families to return to this traditional pastoral life and beekeeping is an important part of that.

The new beekeepers have to be chosen with the following criteria in mind;

*they must have a garden or access to one

* gardens where there are no bee populations should be prioritised

* they must be practical and responsible and able to stay with the program to the end.

News from the Beekeepers:

They did say it has been a very good year for honey. Each beekeeper was able to make around 3 kg of honey from each hive, and the honey retails at 300 to 400 LE per Kg or £12 to £15 a kg. This represents a reasonable living for a Bedouin with a garden, as he will also earn money from the sale of almonds and olives. No-one had any problems selling the honey as it is highly prized in the bedouin community and much sought after by visiting Egyptians because it is particularly pure with medicinal qualities from the herbs. 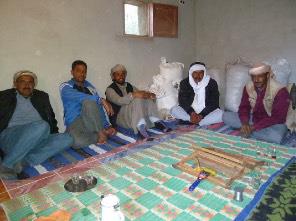 We visited each beekeeper in early May to see him with his hives.

They had produced plenty of honey during two harvests. After the second harvest in September they are leaving any remaining honey to feed the bees over the winter. One student had a problem with a lizard that got to the hives and was eating some bees but he was caught and no longer a problem. The bee-eater birds were more of a problem as they fly overhead looking for bees and whistling. When the bees hear the whistling they won’t come out of the hives and so don’t make so much honey. This happened at the same time as the wasps came as they eat the bees but fortunately they only last a couple of weeks. The biggest problem occured for Hosnee as he has lost 2 swarms because some children came to the garden and tried to get honey ( aged 8 and 13) when there was no one there. They made a fire next to the hives to drive the bees out and left the covers off and disturbed the swarms so the queens got out with the swarms following. Hosnee has spoken to the family of the children in a Bedouin court, so now the children and family understand the seriousness of the problem caused. The hives were damaged by the fire and are now with the carpenter being repaired. In the spring he will make 2 new swarms from new queens.

The students all took on a helper during the honey making time, choosing a young boy whose father has died. Such children often find life difficult and finances are in even worse states in such families. They hoped to inspire the boys to take up beekeeping in the future. The other people who have benefitted from the course are the wives of the beekeeping students. Although they could not attend the training sessions with their husbands according to Bedouin traditions, their husbands have been passing on the training so that if they are away, their wives can look after the hives. They found that lots of their neighbours were interested in becoming beekeepers too.

Salem, the teacher, called to make regular checks on all his students and their hives once they had received them. Salem has also said that he is still available for advice and help now that the students have finished the course. He is producing typed notes now for this course and for the next one since we provided him with a laptop from our sister charity ITSA (IT Schools for Africa) which recycles old computers from schools and businesses to send out to IT labs in Africa.

Hosnee had some interesting feedback for us from the course. He said he feels different now he is a beekeeper. He feels he has something to rely on or fall back on. If he runs out of money he can still go to the supermarket and get food, promising honey or the income to come from the honey to the supermarket owner. This gives a sense of financial security. Hosnee’s father died when he was just 13 years old and Hosnee became head of the family, responsible for his sisters and mother and younger brother. This must have been a huge responsibility for someone so young and he has managed extremely well.

He said it helps him to have money for getting married because he can buy things for his wife like kitchen tools. He is feeling more secure and confident providing for his family.

All the feedback from the students was positive and no-one could think of anything that had not gone well. They are very happy to be beekeepers now. Salem is now starting a new intake of beekeepers for another year and we hope to keep this programme running for at least 5 more years.

All the students said they were extremely grateful to their sponsor The Eva Crane Trust for enabling them
to become beekeepers, and asked for their thanks to be passed on the Trust.