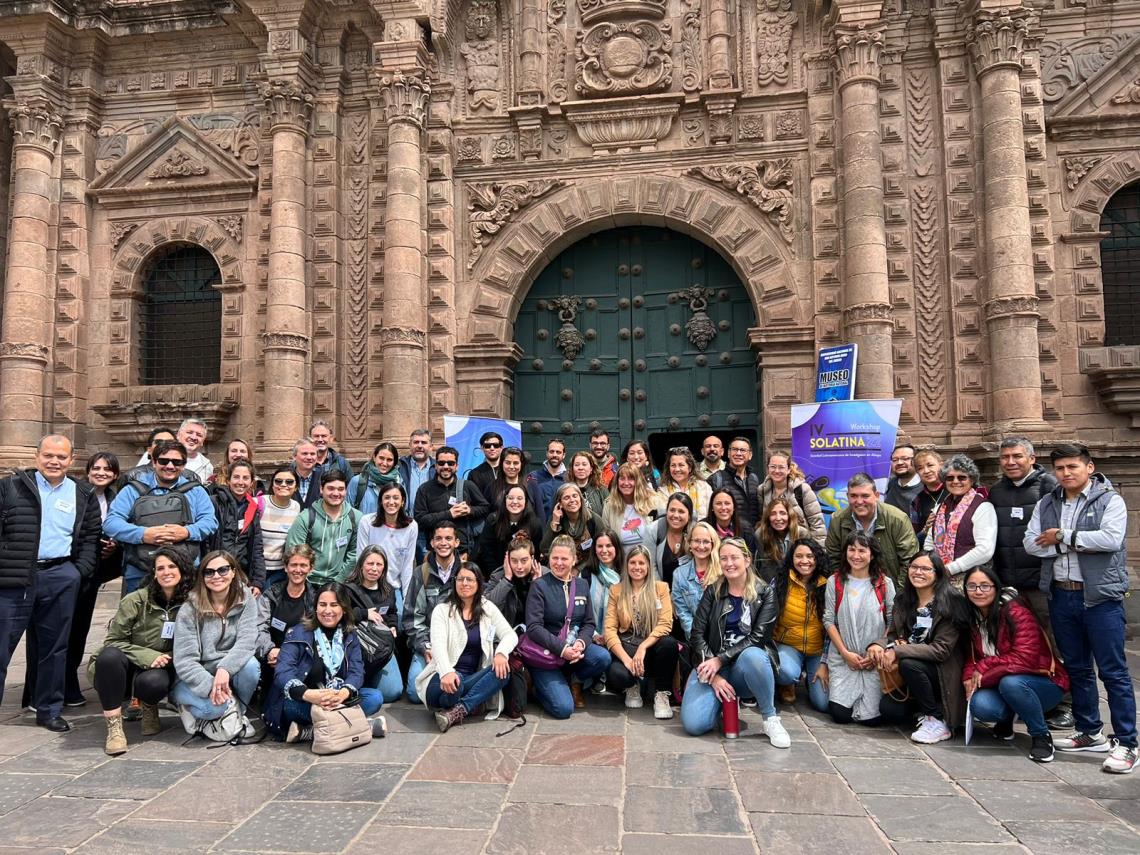 The meeting was organised by SOLATINA’s Directive Committee and the COLMENA Network (CYTED). The Eva Crane Trust, the CYTED program and the Universidad San Antonio Abad del Cuzco generously supported the event.

As part of this workshop two prominent bee researchers were invited to give plenary talks. Dr. Guiomar Nates Parra on "Stories about Bees", and Dr. Alberto Galindo, "Why Drone Congregation Areas are important to the health of Apis mellifera?."

Five round table discussions were held; each one focussed on the research areas covered by SOLATINA's working groups. The following is a summary of the topics discussed, the conclusions, and planned future activities.

Working group on Biology and Diversity of Bees

The Biology and Diversity of Bees working group was, up to this meeting, divided into three subgroups: meliponiculture, bumblebees, and bee systematics. In this workshop the members of the meliponiculture and bumblebee subgroups organised two consecutive sessions each with its own program, while the leaders of the bee systematics subgroup contributed to the activities of both. As a major step towards the strengthening of the meliponiculture and bumblebee research areas within the society, it was decided that both subgroups would become separate working groups within the society. The bee systematics subgroup will remain within the Biology and Diversity of Bees group until it gathers more members and a specific workplan is established.

The first part of the session corresponded to the meliponiculture group and included five short talks on the following subjects:

The group will focus its efforts on the completion of a comprehensive diagnostic for the status of meliponiculture in the region. A national liaison will be responsible for engaging a local team to gather relevant information on multiple aspects, from norms and regulations to knowledge on which species are managed. A regional database will be assembled by the group coordinators. The objective is to determine to what extent the evident growth of the sector is accompanied and supported by national agencies or regulatory authorities following guidelines provided by researchers or based on scientific knowledge of stingless bee conservation. The results of this diagnostic will have a positive impact for the rational development of meliponiculture in the region.

The second part of the session corresponded to the bumblebee group and centred around three subjects:

This session included reports and discussion from different subgroups:

The session of the working group on Pests and Pathogens Affecting Bees included:

Working group on Products, Services, and Commodities Related to Bees

The session started with a brief introduction on the objectives of the group, and an evaluation of how the group has worked. Two subgroups were organised, one on value added beekeeping products coordinated by Dr. Andres Delgado Cañedo; and a second group on pollination services, coordinated by Dr. Marina Basualdo and Rubem Avila Jr.

After the presentation, a discussion followed about approaches to analyse the data from different perspectives, including the potential anthropological implications of the findings. A list of tasks to finalize the work and prepare a draft manuscript were outlined.

This work is unprecedented because it covers the first characterization of pollination niches and reproductive risks for plant species of cultural, social, economic, and nutritional importance; traditionally used by the native peoples of Latin America.

The session was divided into two parts. First, Dr. Fabrice Requier and MSc. Malena Sibaja introduced the objectives and history of the group. They presented the results obtained from 2016-2021 and the manuscripts in preparation based on those results. The long-term trends, the future survey diffusion strategies and result dissemination efforts were outlined. Finally, based on the experiences gathered so far, different lines for future work based on the surveys were proposed. The proposed strategies and the future activities of the group were discussed.

SOLATINA's IV Workshop was a success thanks to the active participation of all researchers and the generous sponsorship provided by EVA CRANE and CYTED. We are certain that the commitment of our associates to continue collaborating on the lines of work proposed in this workshop will promote the advancement of bee research in Latin America.