Italian Apiculture: A Journey Through History and Honey Diversity

Italian Apiculture: A Journey Through History and Honey Diversity 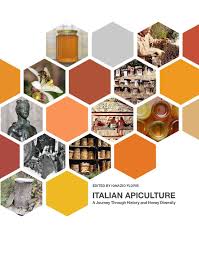 A tribute to Eva Crane

Italy is a country where the bee culture has permeated, more than elsewhere, the history of mankind, including his traditions, economy, humanistic and artistic expressions. This has been favoured by the geographical and cultural diversity that characterise the 'Bel Paese', moving from north to south, including the islands.

Apart from the monumental worldwide historical work of Eva Crane, where Italian beekeeping is covered, there is a lack of any extensive treatise which illustrates and sums-up the richness of Italian beekeeping in the diverse regional cultures of the peninsula and its major islands.

This book represents a first attempt to summarize the diverse knowledge of Italian beekeeping and its history, including the diversity of honeys. This is certainly a very ambitious work of which treatise represents only a partial contribution that may hopefully be enriched with updates in the future. 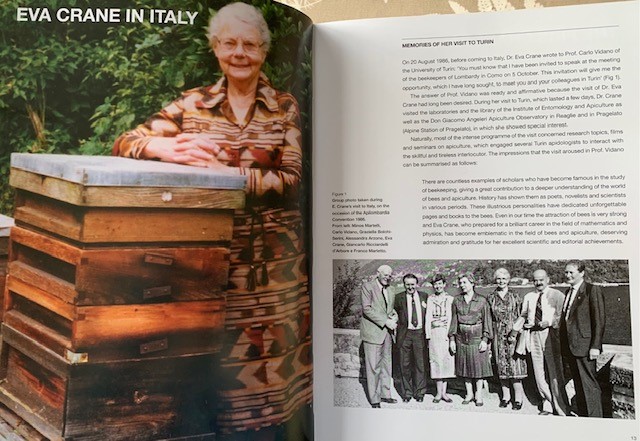 In 1986, Eva Crane was invited to speak to a beekeeping gathering near Lake Como. She took the opportunity to visit to the Bee Institute in Turin where she was warmly welcomed. Her visit left an indelible impression on those who met her, and it inspired many who were to follow, including those who have contributed to and produced this book.

Apis mellifera can be found all over the long and physically varied Italian peninsula. They happily exist in the high Alpine pastures of the north which have a high seasonal and even diurnal range of temperatures. They also flourish in the warmer and often seemingly quite barren southern regions and islands. The book traces their presence through thousands of years beginning with northern cave paintings going back many millennia. It shows how, in the various regions, hunting bees gradually became having bees and later keeping bees through active management. Hive remains and similar artefacts help create a picture of beekeeping two thousand years ago, but it is the writings of Romans like – Pliny, Varro, Virgil, Columella and others that really inform on how bees were kept at that time. Each region has its story to tell and the Latin texts are examined very fully and expertly by those familiar with each area. From these texts it is possible to discover the various materials used for hives and some interesting regional variations as well as similarities appear.

After the Romans all Europe went into the Dark Ages. Nevertheless, a few brave souls did record their observations and the research put into this book has included them. A rare and important contribution to the history of beekeeping development. The Renaissance brought enlightenment and a surge in all science including that related to bees. The first bees recorded from observation under a microscope were drawn in Italy by Prince Cesi in 1625. Creative and imaginative beekeepers have always inspired progress. In the Italian regions some had just a local following, others went on to be national and international figures. The book recognises that they all have their place.

Italian Apiculture also looks in superb detail at the variations of honey to be found today in a country with rich and varied forage for bees. It is beautifully illustrated throughout. It brings together the threads of the story from historical, modern and regional perspectives and weaves them into a rich tapestry which is Italy’s beekeeping heritage.

The Eva Crane Trust is pleased to have helped make this publication possible and hopes it will be read and enjoyed by all those who love bees today and for generations to come.

Chairman of the Eva Crane Trust.