How are microplastics affecting honeybees, and are they in our honey?

How are microplastics affecting honeybees, and are they in our honey? 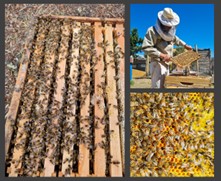 Plastic has undoubtedly brought convenience into our lives since its development in the 1950´s but, its waste has also become a serious and global concern. Mismanaged plastic residues tend to end up in the rivers and oceans, and eventually break down into smaller particles. Fragmented plastic particles of less than 5mm in size are now termed microplastics (MP), which may be primary when they are manufactured in that size range (microbeads used in the cosmetic industry or nurdles which are used to produce plastics), or secondary when they occur after fragmentation of plastic products. The presence of MPs has been reported in different types of environmental compartments worldwide such as atmosphere, water, sediments, soils, as well as in freshwater bodies and drinking water. There are numerous studies reporting ubiquitous contamination with MPs in fruits and vegetables, honey, beer, salt, among other foods, demonstrating that plastic pollution is a worldwide serious phenomenon and that exposure in terrestrial organisms is warranted. However, little is known of the effects of microplastics on insects and very few studies have investigated the effects of these microplastics on honeybees.

MPs are considered emerging and persistent pollutants that add to the suite of contaminants in the environment, so their toxicity, and potential effects on honeybee vitality have yet to be studied. Honeybees can pick up microplastics from the air, water and nectar and are particularly fragile organisms, as global numbers are decreasing due to factors including habitat disruption, pesticides, and climate change.

The main goals of this project were to gain further knowledge on the exposure to and toxicity of microplastics to honeybees. We hope to provide information that will help understand the risks associated with MPs to bees and the environment, and raise awareness and changes in attitudes related to plastic pollution. Our objectives were 1) to monitor the presence of microplastics in freshwater bodies that honeybees use as water source, 2) to assess acute and chronic toxicity of microplastics on honey bees  2) to determine the cycle of microplastics within the hive, their effect on honey production, and if the ingested microplastics are transferred to the brood and incorporated into the hive products: honey, wax. 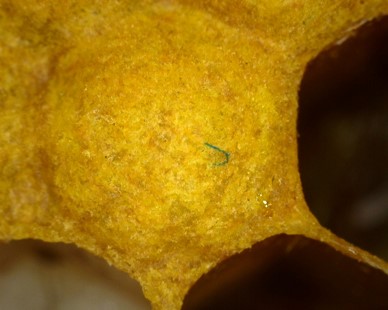 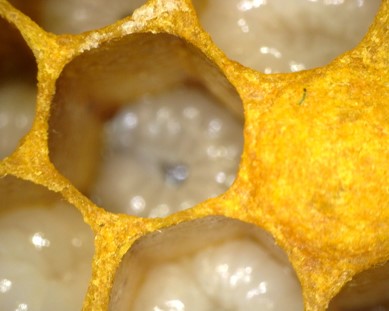 After 1-month exposure to sucrose treated with microplastic fibers, this contaminant was present in the wax, honey, bees and larvae.  Here we show contaminated brood cells and larvae.

We identified contamination with secondary MP at all the Patagonia freshwater lakes studied, with predominance (> 90%) of textile-based microplastic fibers. Remarkably the levels of contamination were similar in all the sites, with an average 5,257 MP/m3, independently of population density. These results support the notion that there is atmospheric transport of MP between places. Most of the microplastics found were small enough to be ingested by honeybees, demonstrating that insects are exposed to this type of pollution. Our results also agree with previous studies reporting plastic pollution even in remote areas of the world. These results provide knowledge on the pollution levels in freshwater and terrestrial ecosystems, demonstrating that plastic pollution not only pertains oceanic environments. Based on our results, as well as on previous literature, microplastic fibers are the most abundant type of MP present in freshwater. Thus, we conducted acute and chronic toxicity bioassays with polyethylene microfibers to evaluate their toxicity to honeybees. According to the results of the acute toxicity bioassays, MPs do not pose an imminent threat to honeybee health through acute mortality. We also found that honeybees do not avoid water and sugar sources that are contaminated with MP. Thus, there could be long term effects from chronic exposure that need to be studied.

A chronic toxicity field study was conducted to assess the toxicity of MP on Apis mellifera hives. We aimed to determine if MP ingested by honeybees are incorporated into hive matrices, including honey, and their impact on colonies development and honey production. We fed beehives with sucrose solutions treated or untreated with 50 mg of Polyester microfibers/L ad libitum for one month. Microplastic fibers (MF) were incorporated by adult worker bees and remained in their body, digestive tract, larvae, honey, and wax. However, most of them were accumulated in wax showing that honey remains as a safe food. At the end of the experiment no differences in honey production or bee population were observed, suggesting that MP toxicity is low. This was the first study to evaluate in the field the effects and dynamics of MP on honeybee hives. Our results show microplastic fibers are incorporated into the beehive when they are ingested by bees. We showed that honeybees can pick up the microplastics present in the environment through ingestion and through their cuticles, incorporating them into the different matrices of the hive. Moreover, they do not avoid sucrose sources when they are contaminated with microplastics.

Microplastic fibers are a ubiquitous contaminant in the water and air and honeybees incorporate them through ingestion as well as on the cuticle. Toxicity results suggest that MPS do not pose a threat to honeybees in the short term, based on the lack of acute mortality.  However, bee foraging behavior does not prevent them from ingesting MPs present in water or resources. Given that microplastics have low acute toxicity, and high environmental persistence, they are easily incorporated from the environment and will accumulate in the hive, posing sublethal effects in the long term. Also, these microplastics are incorporated into the hive, honey and brood. Finally, our results show that MP can enter the food chain by being incorporated into the honey, with direct implications for human health.

Further knowledge is needed on the sublethal effects of MPs, as well as on the risk associated with the accumulation of this persistent contaminant (its additives and adsorbed contaminants) within the hive. Future work could also investigate ways to reduce honeybee exposure to microplastics.

Publications derived from the project

Alma, Andrea Marina and de Groot, Grecia Stefanía and Buteler, Micaela, Microplastics Incorporated by Honeybees from Food are Transferred to Honey, Wax and Larvae. Available at SSRN: https://ssrn.com/abstract=4156372 or http://dx.doi.org/10.2139/ssrn.4156372