Update: The effects of pathogens on brain and behaviour in bees.

Update: The effects of pathogens on brain and behaviour in bees.

The effects of pathogens on brain
and behaviour in bees

Research has shown that many pathogens affect honeybee health; however there is still much that we do not know on how these pathogens are spread from one honeybee to another, one hive to another or one apiary to another. The presence and spread of pathogens in honeybee colonies has traditionally been assessed using crude invasive manual methods such as opening the hive and visually inspecting colonies for signs of disease.

This research aimed to develop a more powerful, accurate and non-invasive method for diagnosing pathogen dispersal within honeybee colonies. A tracking system, using X-ray Computerised Tomography (CT), is being developed to show how and when honeybees pass food from one be 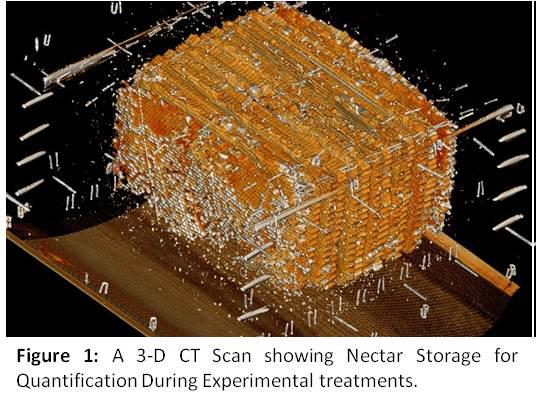 e to another within the hive. Human body CT scanners are being used to visualise the inside of honeybee hives.

Funds from the ECT have enabled CT scanning of beehives and the development of, within hive, tracking methods for food storage (Fig 1). These methods will make it possible to determine the effects of environmental influences on bee storing behaviours. Next year differences between hives which are exposed to different environmental chemicals will be quantified. The methods will also be valuable for other insect pollinators such as bumble bees, stingless bees, ants, wasps and also for the commercially important species of termites.

To determine why storage behaviours in bees might be different when they are exposed to the effects of environmental influences, these new methods have been combined with MicroCT scans performed on individual live bee brains to elicit potential links between storing behaviours as seen in Fig 1 and bee memory and learning. Figure 2 shows a MicroCT scan of a single live bee. Information from this scan will be compared to differences in storing behaviour from Fig 1. 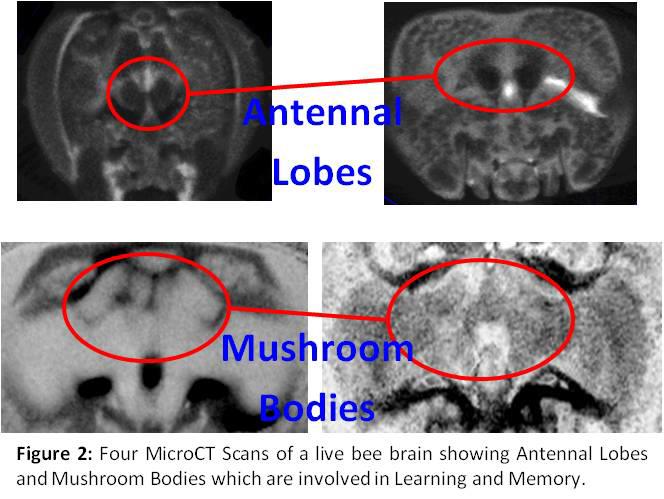 To date, the project has identified differences in honey storing behaviours in bees once after being exposed to neonicotinoids, pyrethroids and a combination of both. Data has been collected on forager return times during greenhouse experiments (Publication preparation is in progress). The project has developed methods for quantifying homey storage behaviours (Publication preparation is in progress). Methods have been developed to quantify bee brain volume changes that are linked to learning and memory in bees while exposed to different environmental chemicals (Paper submitted to Biomedical Physics & Engineering Express Journal).

• Title: Learning and Memory Changes are linked to Brain Volume Changes in Bees when exposed to Environmental Chemicals