Applying quantum physics to track pollen grains and the importance of pollinators.

Applying quantum physics to track pollen grains and the importance of pollinators.

Flowers evolved primarily to facilitate pollen movement from anthers to stigmas by animals. Since the evolution of flowers, flowering plants have exploded in species diversity, becoming the most diverse group of plants on earth, with 87.5% of species depending on animals for pollination (Ollerton et al. 2011). Animal-mediated pollination is therefore a fundamental ecosystem process, not only responsible for maintaining plant reproduction and ecosystem stability, but also for gene-flow between plants, plant speciation, and the evolution of floral traits (Ollerton 2017; Minnaar et al. 2019). Moreover, we rely on bees, especially honeybees, to pollinate a substantial portion of food and beverage crops grown worldwide (Klein et al. 2007; Aizen et al. 2019). To ensure that these crops produce fruits and seeds requires a staggering number of bees (e.g., two million hives are needed just to pollinate almonds in California every year [McGivney 2020]). However, despite the importance of pollination to global conservation and food security, we have mostly been studying the process of pollination by proxy.

To understand pollination and the importance of different pollinators, we need to be able to track the movement of pollen grains to see where, and how efficiently, different pollinators move pollen grains. Unfortunately, directly tracking the movement of pollen grains has historically only been possible for Orchids (because their pollen comes in large packages that can be stained), and a handful of other species. While modern molecular techniques can reveal which plants donated pollen to fertilise which seeds, these techniques are very expensive and time-consuming, requiring entire populations to be genotyped. They also don't really tell us how the pollen grains ended up fertilising seeds in the first place, which pollinator transferred the pollen, or how much of that plant's pollen was lost. Because we haven’t been able to directly track the movement of pollen grains, we have had to rely on observations of flower visitors, or the movement of dye particles as a proxy for how pollen may be moved between flowers. But, not all visitors to flowers move pollen in the same way (some don't transfer any pollen), and dye particles are not the same as pollen grains.

To solve this problem, I developed a novel pollen tracking technique with the help of my PhD supervisor, Prof Bruce Anderson. The method makes use of quantum dots, which are semiconductor metal crystals that are so small, they behave like artificial atoms. Instead of moving about freely, the minute size of the crystals only allow electrons to occupy two states (quantum confinement). When exposed to UV light, the electrons become excited, jumping from one state to the other and releasing bright light energy as they jump. The colour of this light can be fine-tuned by altering the size of the quantum dot. Quantum dots can also be equipped with binding groups that allow them to attach to specific molecules. Therefore, their small size, wide variety of possible colours, and the ability to attach them to different molecules using functional binding groups, makes quantum dots ideal markers for tracking small things. For example, quantum dots have been used to track the movement of cancer cells by equipping the quantum dots with cancer-specific binding groups (Gao et al. 2004). I knew that quantum dots could theoretically be used to track pollen grains, but first, we needed to find a method to attach quantum dots to pollen grains. 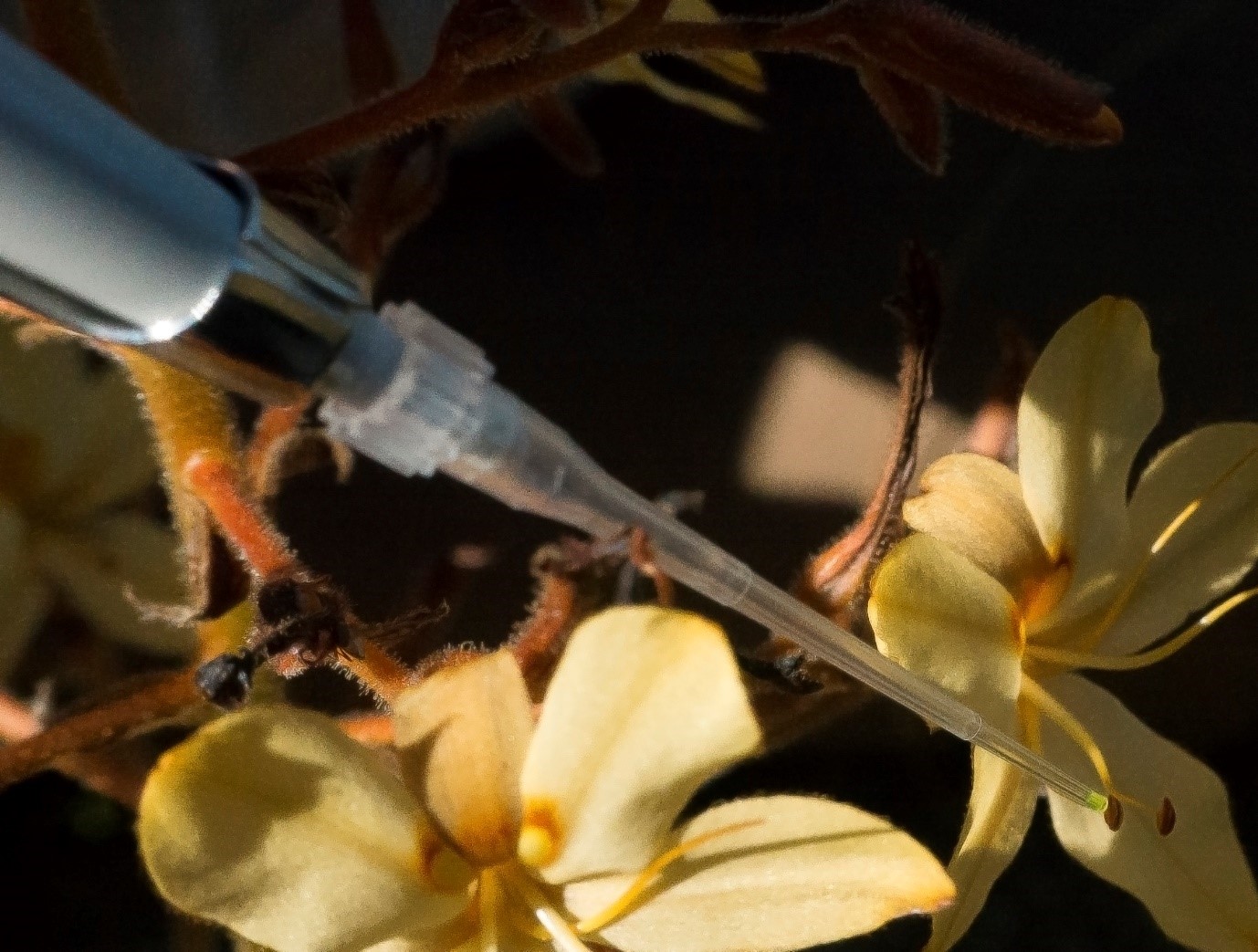 Now that we could label pollen grains, we needed a method to read these labels. Since pollen grains are microscopically small, they need to be viewed at least X40 magnification. But, to see the quantum dot labels, the grains need to be exposed to UV light in dark conditions so that the glowing quantum dots can be spotted on grains that have been labelled. There are dedicated fluorescence microscopes for this kind of microscopy, but they are very expensive. We wanted our method to be widely accessible to all labs, including those without specialised equipment or a lack of funds to procure specialised equipment. I therefore designed a quantum dot excitation box that can be placed under any standard dissection microscope (most pollination labs have at least one of these). The 3D-printable box allows users to place stigmas of flowers or insects that they expect to find labelled pollen grains on inside the box where the samples are flooded with UV light. Any labelled grains will glow with the colour of the quantum dots attached to them and can be viewed through the box’s UV blocking filter. 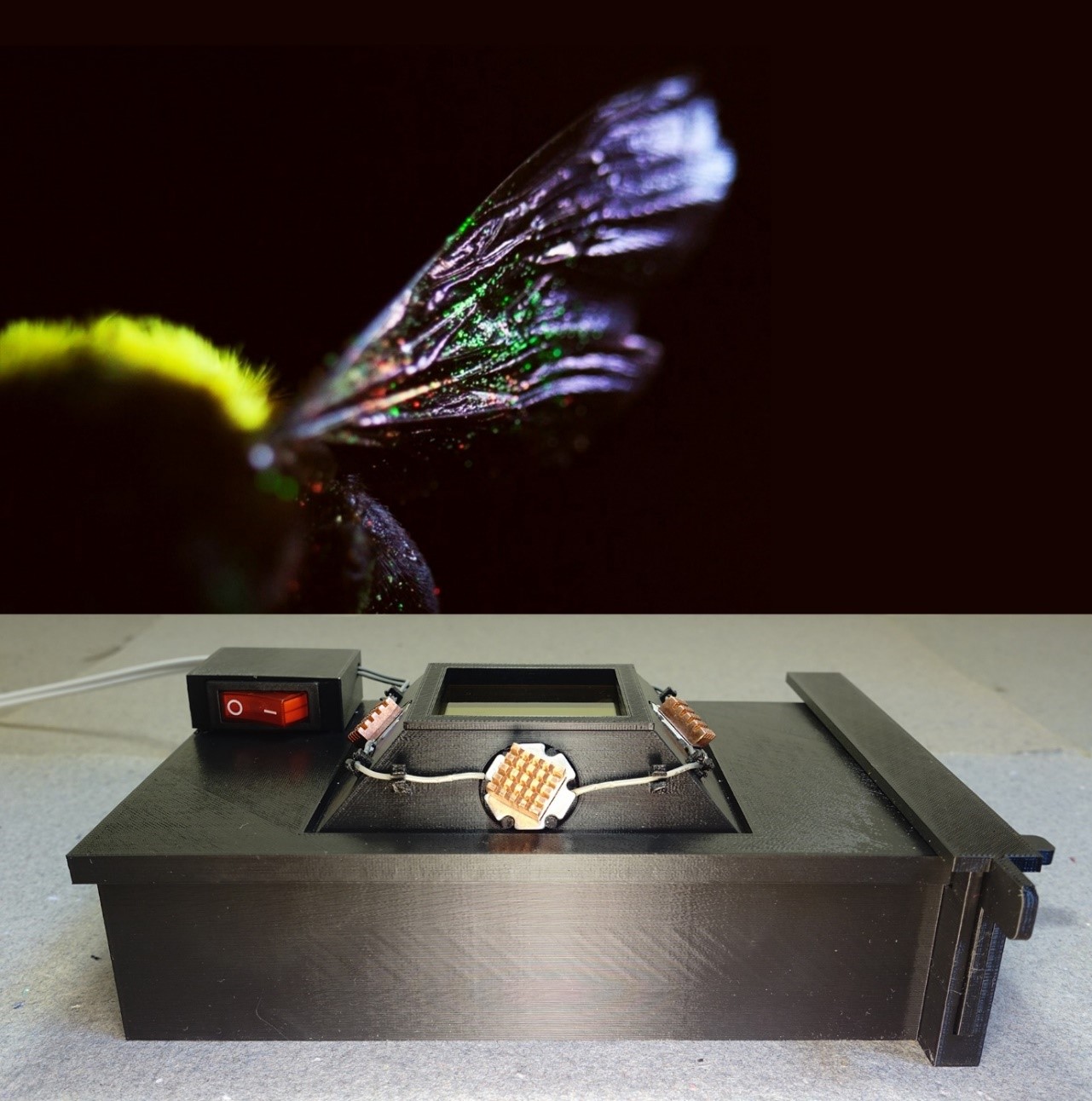 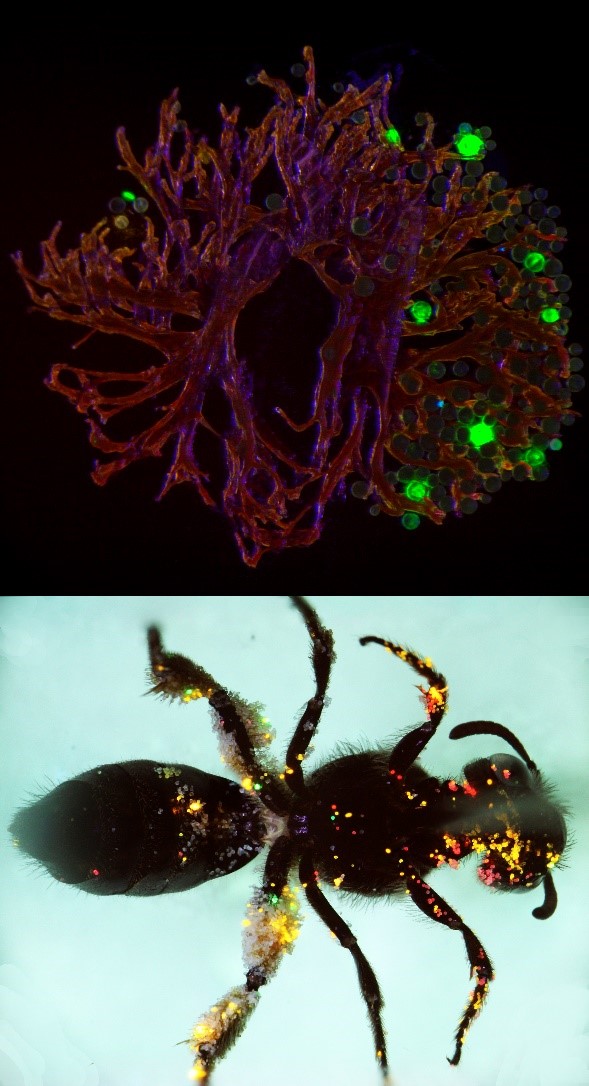 Validation of the method.

While we felt confident that the method was working, we needed to validate it. Specifically, we wanted to see if the quantum dot labels applied to pollen grains would affect how pollen grains move between flowers—pollen tracking method that changes the way pollen grains move wouldn’t be very useful. To test the method, we trained a small colony of honeybees to visit Sparaxis villosa flowers in a custom-built bee flight cage. Once bees were trained to visit these flowers, we would let a single bee from the colony into a separate chamber of the flight cage, where we allowed the bee to transfer either labelled pollen grains or unlabelled pollen grains to a sequence of 10 flowers. We repeated the experiment 15 times for unlabelled and labelled grains each and checked to see if pollen grains were being transferred to the sequence of recipient flowers in the same way. We found no difference in the way that pollen grains were transferred. A description of the method and the results of the validation study have been published in Methods in Ecology and Evolution (Minnaar and Anderson 2019).

We anticipate that this method will be widely adopted and will allow researchers to finally answer questions that have been historically been difficult to tackle. For example, researchers can assess the magnitude and frequency of pollen loss during various stages of the pollen export process; the importance of pollinators in driving pollen movement patterns that cause speciation and maintain diversity in angiosperms; and the importance of specific pollinators in facilitating reproduction and persistence of plants in vulnerable ecosystems and economically important agricultural systems.

We would like to sincerely thank the Eva Crane Trust for their support in this project. With the assistance of the trust, we were able to buy high-quality quantum dots, build flight cages for our validation experiments, and buy a 3D-printer which allowed us to develop the quantum-dot excitation box. Most importantly, without support from the trust, Corneile Minnaar would have been unable to continue this work during his PhD.

Additional support was provided by the National Research Foundation of South Africa. 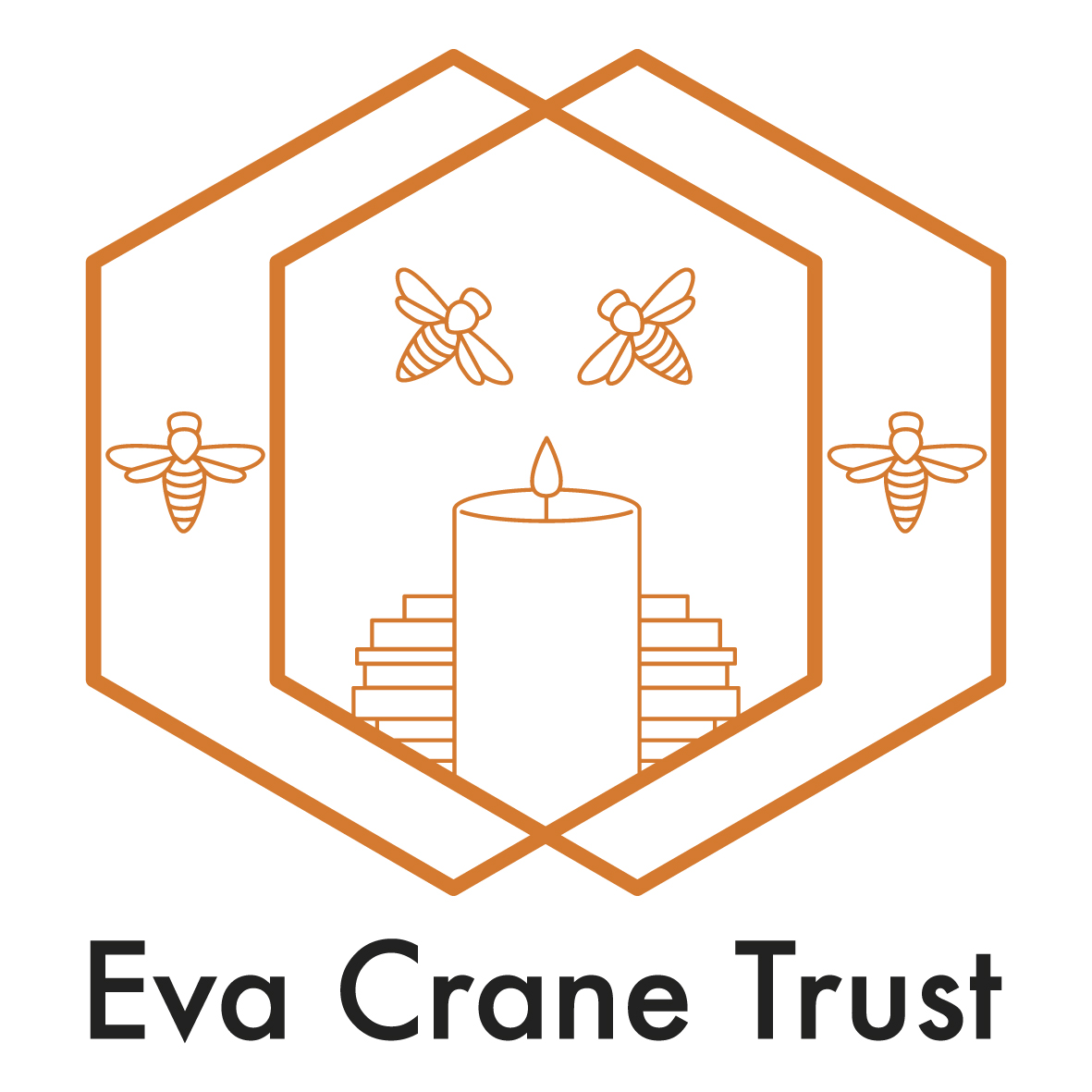 Klein AM, Vaissière BE, Cane JH, et al. 2007. Importance of pollinators in changing landscapes for world crops. Proceedings of the Royal Society B: Biological Sciences 274: 303–313.

McGivney A. 2020. “Like sending bees to war”: the deadly truth behind your almond milk obsession. https://www.theguardian.com/environment/2020/jan/07/honeybees-deaths-almonds-hives-aoe. 30 Jan. 2020.

Minnaar C, Anderson B. 2019. Using quantum dots as pollen labels to track the fates of individual pollen grains. Methods in Ecology and Evolution 10: 604–614.