Indigenous bees of the mountainous Nilgiri Biosphere Reserve (NBR) are known to play an important role in forest pollination and local livelihoods, yet they have not been scientifically identified or classified. Their populations and distributions are unknown and their vital role in pollination and the maintenance of forest biodiversity has not been studied. There is limited or no data available on existing populations of various types of honey bees and hence there exists a need to do a quantitative analysis of such information. Since there is little available data on the populations and ecology of the bees, it is imperative to have a methodology to estimate nest density in the wild.

The distribution of species across landscapes is affected by multiple factors operating at different scales, among which habitat characteristics, predation pressure and the availability of nesting sites could be important. For social insects, and particularly bees, food limitation, nest predation, and the spatial dispersion of forage plants, nesting sites and nest-building substrates may be important factors constraining population size and reproduction. The importance of food limitation was demonstrated in a study where the nest densities of stingless bees varied 20-fold in relation to floral resources. For social bees that nest on trees or rock faces, nest height, which places nests out of reach of terrestrial predators such as humans and bears, is probably an important factor influencing nest site selection. Nest site predation of Meliponine colonies by tool using humans and chimpanzees averaged 12% per year in Uganda and decreased with increasing nest height.

The Nilgiri Biosphere Reserve (NBR) has a wealth of biological and cultural diversity and is part of the Western Ghats chain of mountains of the Indian peninsula It has a total area of 5,520 km2 spread across the three southern states of Karnataka, Kerala and Tamil Nadu from latitude 10º 45’ N to 12º N and longitude 76º E to 77º 15’ E. Six protected areas lie within the reserve, and larger tracts are under Reserve Forests that have a lower level of protection. Altitude ranges from 250m to 2,650m. The intensity of the rainfall brought by the south-west and north-east monsoon winds differ across topographic and altitudinal gradients. 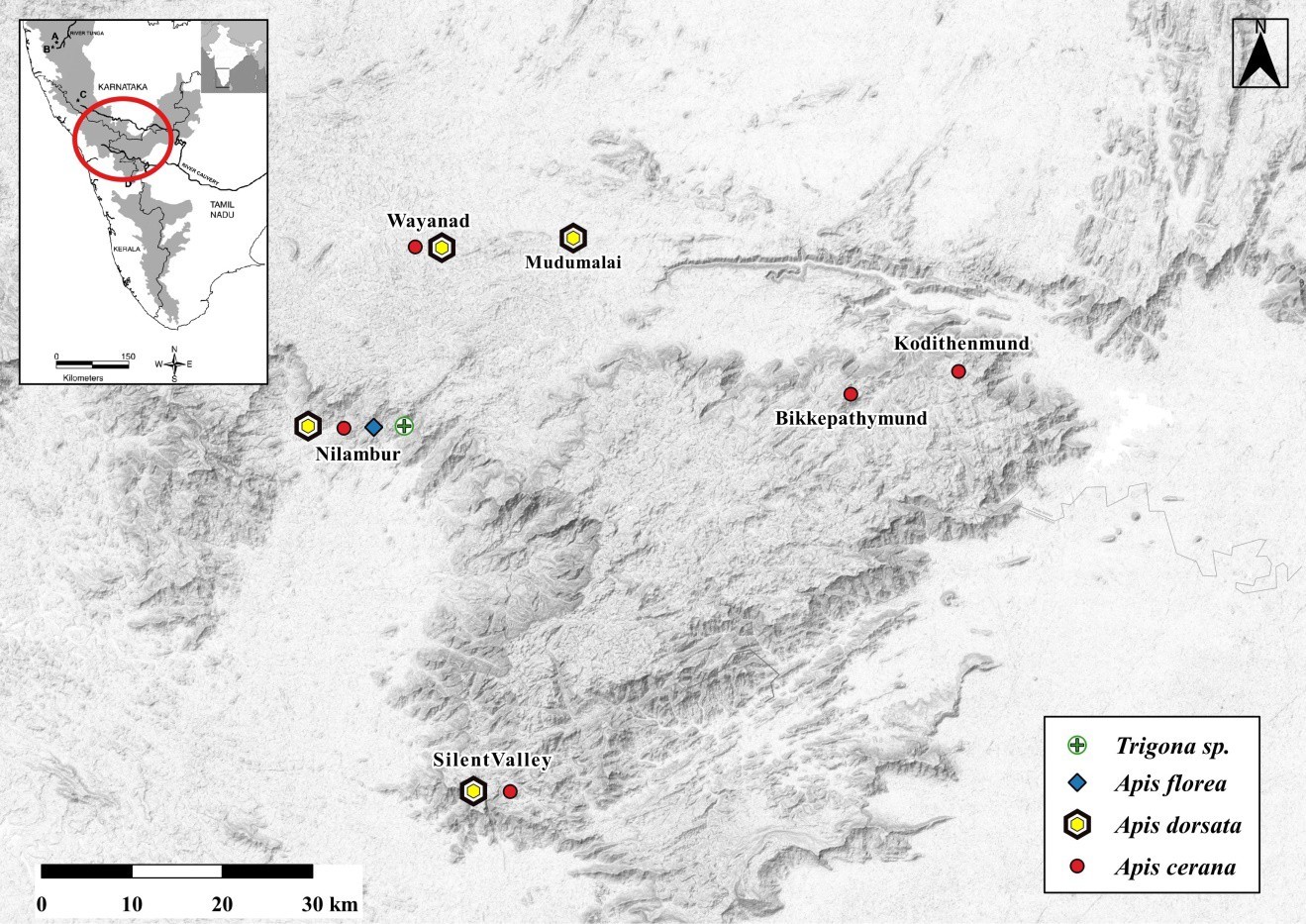 Our project aims to assess populations, nesting sites and to establish a protocol for long term monitoring of honey bees in the wild. Keystone Foundation (www.keystone-foundation.org) has been working on wild honey collection and honey bees since 1993. In 2007-09 we assessed the status of honey bees in the wild, with a grant from the Darwin Initiative, UK. With our collaborators from University of Reading, University of East Anglia & Pondicherry University we developed and implemented methods to estimate wild honey bee populations. We also shared our methods with several partners in South and South East Asia & established protocols for sustainable honey harvesting practises. Now a decade later, we were able to revisit the sites & estimate current status of the honey bee populations and their habitats with support from the Eva Crane Trust. 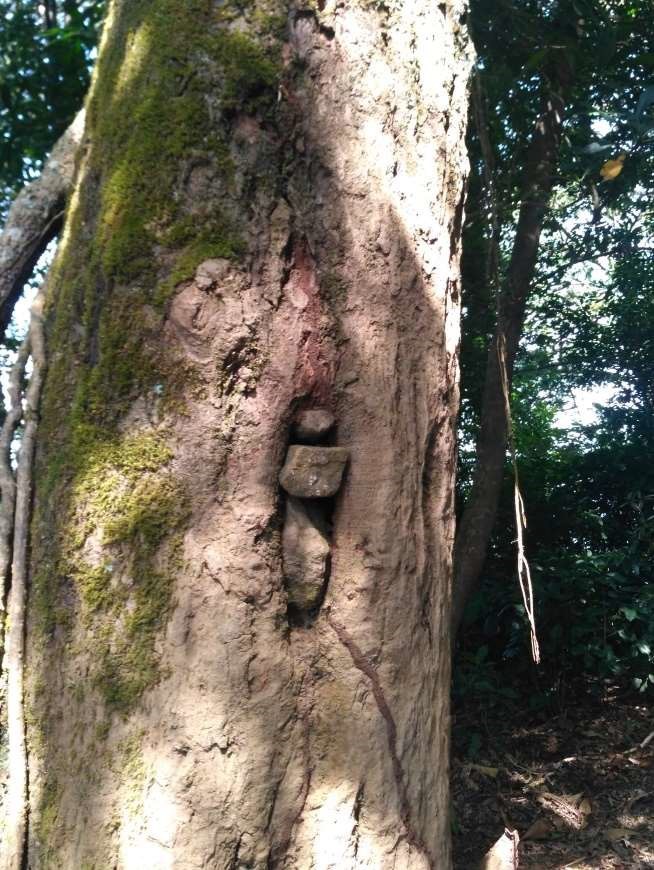 In the previous study a single 5-km long transect was the sampling unit and each transect was walked in one direction once in the morning hours by 3-6 experienced observers including tribal honey collectors. This year we were able to undertake this for the resurvey in Silent Valley NP.

In the previous study we used data from plots of 10x10m dimension covering approximate area of one ha in each study site. The plots were randomly placed in the forests at different distances and directions from the focal villages at radii ranging from 2-5 km. This year we revisited as many nests that were identified in the previous survey and we were limited by the time allotted for the survey by the Forest Department.

Despite the several challenges that we faced in undertaking this survey we were able to get back to more than 50% of our sites and revisit the nesting sites. Even if the seasons did not match we were able to observe remains of nests and also talk to local people about the nesting of honey bees and this way get the quantitative figures.

Estimating bee nests in the wild seems to be a task that not many are undertaking. There is an absence of literature regarding this and there seems to be no published studies. It is therefore important that we can undertake this study and present to the scientific world. Our present study has brought out several factors that need to be considered for the future.

We have been able to generate an interest in the local forest managers and able to impress upon them the need for this kind of a regular monitoring and we are hopeful that we will be able to undertake studies in the forests in participation with them. Through this survey we have identified nesting sites which are frequented by the bees Apis dorsata, A.cerana and Trigona which can be monitored more regularly. Apis florea has preferred habitats and therefore in this case a forest patch can be included in the monitoring protocol for this bee.

Overall it seems like honey bees in the wild continue to migrate, forage and build nests in this landscape. There have been no reports of honey bee absences or declines from the local communities who we interacted with during the survey. There were some tracks and nesting sites that we were not able to access since the paths had been overgrown and invasive plants taken over. This also needs to be studied in terms of impact of changing vegetation dynamics and nesting site availability for honey bees in the wild.

There is a need to understand the diversity and distribution of all native bees and the role of the forests in providing them with protected refuges. This project has given us an opportunity to re-open the conversation with the forest department on bees in the wild and there is an interest from their side also to work on this for the long term and in participation. 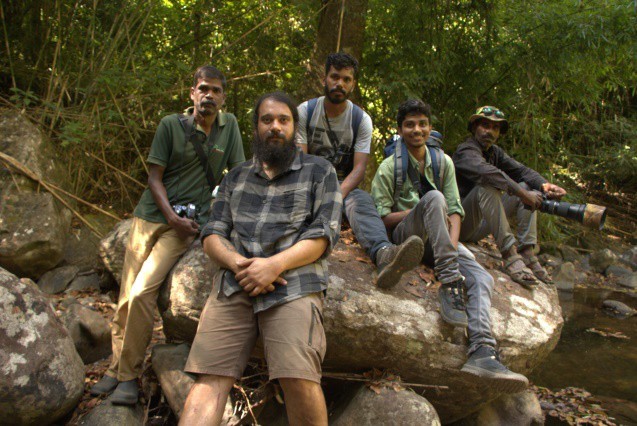 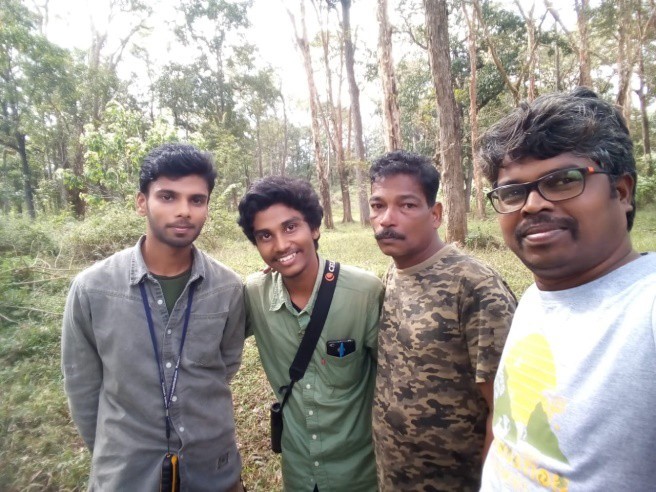 Keystone Foundation is grateful to the support and encouragement we have received from the Trustees and office team of the Eva Crane Trust to persist with our surveys in the face of several unexpected challenges. This work would not have been possible without their support and this has opened the doors for further work about this important topic. 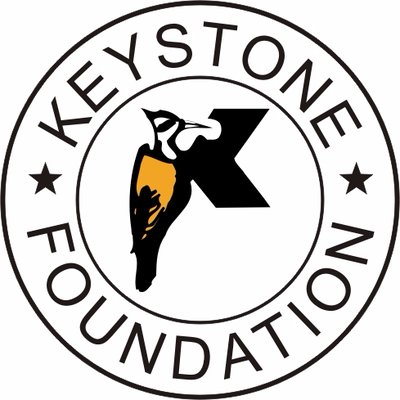